He was speaking to reporters after holding meetings with senior politicians and others there earlier in the day, to advance the UN’s idea, first proposed more than a year ago and discussed in town halls across the country, of convening a Libyan National Conference on the nation’s political future, which could finally end years of turmoil following the removal from power of Muammar Gaddafi, in 2011.

The UN has no agenda and no interests in relation to Libya but one: the welfare of the Libyan people, the peace in the country, and the possibility to live in a normal democracy - UN chief Guterres

Libyans “have suffered too much and deserve to live in a normal country with normal political institutions, with peace, security and prosperity,” said Mr. Guterres, adding that “the UN has no agenda and no interests in relation to Libya but one: the welfare of the Libyan people, the peace in the country, and the possibility to live in a normal democracy and to take profit of the enormous wealth of the country to benefit its citizens.”

"It is not through foreign intervention that we are going to solve the problems of any country”, he added, “and so it’s important that that principle also applies to Libya.”

The Conference, he said, would be “Libyan-led and Libyan-owned inside Libyan territory to be able to discuss the future of Libya…And the UN is totally committed” to organizing it, he added.

Following the movement of military convoys from the east towards the capital, reported early on Thursday, the UN chief made a “strong appeal” for de-escalation and an end to any deployments by any military factions within the fractured State.

Resuming political dialogue between the internationally-recognized Government and military factions which control - or are seeking to control - other parts of the country was essential, said Mr. Guterres: “I am ready to assume the initiative that might be necessary for that to be possible, if the conditions allowing for it are met”, he added.

The UN chief also described how he had been “moved and shocked” after visiting a detention centre for refugees and migrants, “shocked by the level of suffering, and especially by the level of despair that I found. This is, of course, not only a responsibility for Libya, it’s a responsibility for the whole of the international community”, he added.

He told reporters that for migrants and refugees in search of a better life who feel compelled to travel through Libya in the hopes of reaching Europe, “it would be very difficult to argue that disembarkation in Libya is disembarkation in a safety situation. My appeal is for the international community to understand the need for international refugee law to be fully respected, and the need to address the migration problem in a way that is compatible with the defence of the interests of the State, but also the human rights of the migrants.” 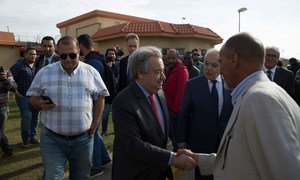 The UN chief has expressed his deep concern by the reported advance of forces based in the east, towards the Libyan capital, Tripoli, declaring that “there is no military solution” to restoring peace and stability to the country. 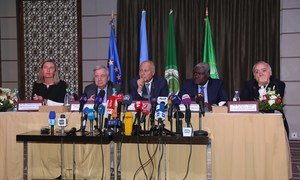