MONUSCO/Force
Brigadier General Emmanuel Wekem Kotia, the Commander of the Western Sector in the UN Peacekeeping Mission in the Democratic Republic of the Congo (MONUSCO), surveying troops.

Brigadier General (Dr) Emmanuel Wekem Kotia, the Commander of the Western Sector in the UN Peacekeeping Mission in the Democratic Republic of the Congo (MONUSCO), spoke with UN News about his decades-long service, which includes participation in the Organization’s ground-breaking transitional operation in Cambodia – a launch pad for key UN peacekeeping activities such as disarmament and reintegration, and electoral support component – and the post-electoral security landscape in the DRC.

UN News: How would you characterize the current situation in the Democratic Republic of the Congo?

Brig. Gen. Kotia: The situation remains calm. The President is continuing the transition by nominating his prime minister and other key ministers.

Security wise, there Western sector remains relatively calm, except for a few ethnic problems within the Yumbi area and the Kasai regions. However, on the Eastern front, there continue to be a number of activities by armed elements. MONUSCO, jointly with the armed forces of the DRC [known by the French acronym FARDC], are continuing to monitor the situation [there].

Also, one must not discount the issue of human rights abuses sporadically being perpetrated in various parts of the country. In addition, the continuing increase [in the number of cases] of the Ebola virus disease in the eastern part of the country, specifically Butembo (in North Kivu) and the other areas in the east, is cause for concern.

So far, more than 700 Ebola cases have been identified. However, MONUSCO, humanitarian and other UN agencies, and the local authorities, are continuing to work very hard to contain the situation.

The relationship between the [FARDC] and MONUSCO has been very cordial. Even in the Eastern sector where we have the armed elements who are fighting against the Government. MONUSCO personnel are jointly working out plans and fighting alongside the FARDC against the rebel groups in those areas.

However, it must be noted that the Congolese Government may need to enact a host of measures to be able to facilitate the operational capability of the FARDC, as well as provide logistic facilities or resources for the civilian police to be able to undertake their duties within local communities.

It is also very important for the Government to take ownership of the disarmament, demobilization and reintegration (DDR) process for all the rebel factions that are turning in their weapons or voluntarily disarming themselves, especially in the areas around the Kasais.

MONUSCO/Force
Brigadier General Emmanuel Wekem Kotia, the Commander of the Western Sector in the UN Peacekeeping Mission in the Democratic Republic of the Congo (MONUSCO).
UN News: What are some of the highlights and some of the challenges you have encountered while serving with a UN mission?

Brig. Gen. Kotia: My participation in UN missions began when [they] were based on the traditional concepts. Now, from those traditional concepts, the UN moved to integrated operations – from dependence purely on a military force, towards a greater level of mixing the police, military and the civilians.

The UN then moved ahead to a more international dimension, by which, in addition to these components that I've mentioned, the issues of human rights and humanitarian support were introduced as part of its missions.

The UN has sustained itself very well in such multidimensional operations for some time. However, as a result of the report issued by the high-level panel that was set up by the former UN Secretary-General and the realities on the ground, in contemporary UN peacekeeping, we have moved from a combination of multidimensional to high risk peacekeeping operations – a situation that is now very dynamic and fluid.

Using MONUSCO as an example, we have the core MONUSCO troops who are working or maintaining peace by protection through projection. However, we also have a Force Intervention Brigade (FIB) that has a mandate to undertake offensive operations to protect civilians due to the [activities] of various armed elements in the region that have attacked MONUSCO, as well as other civilians.

To protect civilians in the DRC and elsewhere, it is important to underline that higher risk peacekeeping missions must move towards more offensive operations. Indeed, the FIB in the Democratic Republic of the Congo could serve as a template for setting up similar capacities in Mali and the Central African Republic, or other high-risk areas that we are might have peacekeeping operations.

One key issue is that in most conflict areas, we operate in very difficult environments, and that is a very big challenge. Peacekeepers come from different countries and they need to get accustomed to these environments.

One must consider [UN peacekeeping] an opportunity to work in the service of global peace. It means that you are an ambassador from your country, working for peace — Brig. Gen. Kotia of MONUSCO

Another challenge has to do with the background of conflicts. Most conflicts, especially those in Africa, are not well-understood by peacekeepers before they are deployed. Since the concepts of operation are not specific, peacekeepers most often must adjust their activities to deal with on-the-ground challenges. Additionally, we sometimes have inadequate numbers of peacekeepers to fulfill a mandate that is very big and that has a very wide scope.

UN News: What are the factors that have helped troops succeed in missions you have participated in?

Brig. Gen. Kotia: There are various factors. First, one must understand that peacekeeping mandates are set [as a matter of] international law. So, adherence to that mandate and policy guidelines and directives are among the key things that have helped troops succeed. Another area that has helped peacekeepers to succeed, and my troops specifically, is that we've had a very intensive pre-operational training before deployment. This training prepares [the troops] through, among others, a simulation of the areas concerned. You get to have a feel for it before you are deployed and so the conditions [on the ground] don’t look so different from what you might have seen in training.

Moreover, training – continuous training and in-mission training ­– is key. In addition, ensuring that troops have equipment to match the mandate of a specific mission is also key to success. Apart from that, sharing the experience of Ghanaian troops, especially in other UN missions, has also helped, and has reiterated the success of our troops in peacekeeping missions.

UN News: What is an essential element in maintaining professionalism in peacekeeping?

Brig. Gen. Kotia: First, peacekeepers must understand the dynamics of conflicts. Without an analytical understanding of the conflict, one might not be able to come up with plans or strategies in which to be able to succeed in a peacekeeping mission. So that is very key.

Respect for the culture of local communities is also vital. Let’s remember that we are helping to stabilize an area or to create a secure environment for the people. We are not there to dictate to them what we want. We are there to support them or to assist them. So, we must first, understand their culture so that we’ll be able to operate within the country and assist them to achieve peace.

Now another aspect that has helped with professionalism is the deployment of more women. In MONUSCO for instance, the introduction of the female engagement team has been very successful. In my sector, especially, when female engagement teams are sent in to assist people in deprived communities, they are very well received. These teams interact with children and other women to help them understand the essence of why peacekeepers have been deployed.

UN News: Can you share with us anything specific that has stuck with you throughout your time in the field?

Brig. Gen. Kotia: If I were to select one special instance or peacekeeping mission to talk about it would be the UN Transitional Authority in Cambodia, which I consider one of my biggest stories. The Cambodia mission was the first transitional authority mission set up in the history of UN peacekeeping operations.

The mandate of that mission set the stage for several groundbreaking policies. First, disarmament, demobilization and reintegration (DDR) was first introduced in Cambodia, and it took place in my battalion. So, for Ghana to be one or the first countries to experience the integration of a DDR programme was quite interesting.

In addition, the UN operation in Cambodia was the first time an electoral component was established as part of a UN mission. That was very useful, and I have been able to share that experience at other missions in which I served. It was also the first time a mission was set up to begin and end within a specific timeframe – in this case, the mission wrapped up within the time set out by the first mandate.

MONUSCO/Force
Brigadier General Emmanuel Wekem Kotia, the Commander of the Western Sector in the UN Peacekeeping Mission in the Democratic Republic of the Congo (MONUSCO).
UN News: What advice or information would you give to men and women in Ghana who are considering serving in a UN Mission?

Brig. Gen. Kotia:I would tell them that it is noble opportunity to serve humanity. It gives you a chance to assist people in need to have a safe environment. One must consider [it] an opportunity to work in the service of global peace. It means that you are an ambassador from your country working for peace.

UN News: How would you describe Ghana’s contribution to UN peacekeeping?

Brig. Gen. Kotia: Ghana’s contribution to UN peacekeeping is quite interesting. Incidentally, it started in the Congo. Ghana was the first country to deploy in the then Congo now DRC, in 1960, with a brigade of troops. After President Patrice Lumumba was killed, the Ghana battalion was redeployed to the Kasais.

Since then, Ghana has become one of leading contributors of peacekeeping in the world. We’ve seen Ghana deployed in 1973 in the Sinai, and then later with a battalion deployed to the United Nations Interim Force in Lebanon (UNIFIL). Ghana also found itself serving in, among others, Cambodia, Rwanda, Chad, Liberia, and Bosnia.

Ghana’s participation has been very tremendous so far as global peace is concerned. Our country has served as a mentor to other countries in this field. We have gone on to establish the Kofi Annan International Peacekeeping Training Centre, which serves as a global training center for various aspects of peacekeeping. Ghana is considered as a mentoring country. 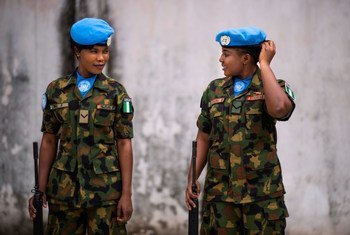 Since the 1960s, Nigeria has been a major contributor of troops and police to United Nations peace operations, having served in dozens of missions. Most recently, Nigerian troops were the military backbone of the UN Mission in Liberia (UNMIL), from 2003-2018, helping to restore security throughout a country that had undergone a brutal civil war.