Reversing an earlier decision, the World Health Organization (WHO) now recommends vaccinating pregnant and breastfeeding women against the Ebola virus.

The announcement was issued on Wednesday from Beijing after a consultation meeting by the Strategic Advisory Group of Experts (SAGE) on Immunization, which the WHO Director-General established in 1999 to provide guidance on the UN health agency’s work.

Noting that these experimental vaccines are “non-replicating or replication deficient,” SAGE concluded that “pregnant and lactating women should be included into the clinical trial protocol.”

“The protocol must include provisions for safety monitoring and for documentation of EVD cases among vaccines, including follow-up of pregnant women and their offspring,” the Group stressed.

According to SAGE, national authorities should choose the vaccine “based on a transparent and evidence-based process.”

Meanwhile, WHO, the Health Ministry and partners continue working to establish the outbreak’s full extent.

As of 16 February, 773 confirmed EVD cases have been reported in one of the country’s most populated provinces – with eight million inhabitants – as well as 65 probable others and 534 deaths.

SAGE recommends that the Ebola inoculation be administered to contacts and contacts of contacts as well as geographically targeted vaccinations to prevent contracting the disease.

The Advisory Group meets biannually to review and critique evidence on immunization and vaccine-related topics, after which it formulates recommendations for WHO vaccine position papers.

♦ Receive daily updates directly in your inbox - Subscribe here to a topic.
♦ Download the UN News app for your iOS or Android devices.
ebola|DR Congo 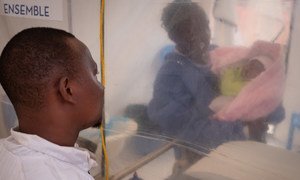 “Brave” UN teams and partners leading the fight against deadly Ebola disease in the Democratic Republic of the Congo (DRC) along with Government authorities and peacekeepers there, have been key in helping protect communities, a top World Health Organization (WHO) official said on Friday, six months after the latest outbreak began.