Now in its tenth month, the Ebola epidemic in the Democratic Republic of the Congo (DRC) has claimed more than a thousand lives, prompting Secretary-General António Guterres to throw the support of “the whole United Nations system” into stemming the spread of the deadly virus.

Mr. Guterres expressed concern over the number of new Ebola cases in the east of the DRC on Wednesday, reiterating UN support “for efforts to end the outbreak”.

“With important shifts in the response now being implemented, the Secretary-General has emphasized his commitment to a collective UN-wide approach, both in Kinshasa, where the UN is led by his special representative, and in the areas affected by the virus, where the response is led by WHO [World Health Organization], all in close liaison with Congolese leaders both in Kinshasa and eastern DRC”, said his Deputy Spokesperson, Farhan Haq, in a statement on behalf of the UN chief.

Mr. Guterres expressed his condolences to the victims’ families and reiterated that the full involvement and engagement of local people “remains the key to successfully controlling the outbreak”.

He also urged “all Congolese leaders to work together across parties and across communities to tackle the outbreak”.

“At this critical juncture”, Mr. Guterres underscored the need for “additional resources” and called on Member States and partner organizations “to ensure the responding agencies have the resources needed to succeed”.

The Secretary-General commended the Government, institutions and Congolese people themselves on the overall response so far, which has contained the outbreak to within parts of two provinces, which are home to multiple armed groups, which have been battling each other and Government forces for years.

He also applauded “the bravery of security, health and humanitarian workers who have put their lives on the line in a challenging environment marked by conflict and insecurity”, including attacks on Ebola Treatment Centres and healthcare facilities and recognized their work in vaccinating more than 100,000 people and saving the lives of hundreds who have contracted the disease.

Meanwhile, amidst continuing violence, WHO experts (SAGE) have recommended new Ebola Vaccination Guidelines to address the challenges in stemming the virus.

WHO Adapts #Ebola Vaccination Strategy in #DRC to Account for Insecurity and Community Feedback 👉 https://t.co/6T7BKNwOGl pic.twitter.com/WC8rbQ32T7

Since the outbreak was declared in August 2018, WHO has said that despite the use of a highly efficacious vaccine, the number of new cases continues to rise, in part due to repeated violence, which has prevented response teams from immediately identifying and creating vaccination rings around all people at risk of contracting Ebola.

“We know that vaccination is saving lives in this outbreak,” said WHO Director-General Tedros Adhanom Ghebreyesus, but “we still face challenges in making sure the contacts of every case receive the vaccine as soon as possible”.

“These recommendations account for ongoing insecurity and incorporate feedback from experts and from the affected communities that will help us continue to adapt the response”, he affirmed.

Among other things, new SAGE recommendations endorse pop-up and targeted geographic vaccination approaches, when appropriate; advise vaccinating the next level of people who may be exposed, such as in neighborhoods where cases have been reported within the past 21 days; and adjusting the current dose to ensure that the vaccine continues to be available to those at greatest risk of Ebola. 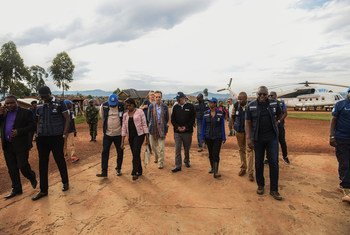