© UNICEF/UN0264163/Hubbard
Thomas Kakule Manole looks on as an Ebola survivor cares for his one week old daughter, Benedicte, in an isolation tent at an Ebola treatment center in Beni, in the eastern DRC. Thomas’ wife died of Ebola and his daughter Benedicte is also infected.

“Brave” UN teams and partners leading the fight against deadly Ebola disease in the Democratic Republic of the Congo (DRC) along with Government authorities and peacekeepers there, have been key in helping protect communities, a top World Health Organization (WHO) official said on Friday, six months after the latest outbreak began.

Dr. Matshidiso Moeti, WHO Regional Director for Africa, was speaking to journalists in Geneva, where she said that challenges persist in overcoming virus hotspots in the north-east of the country.

“We have some 500 staff on the ground at the moment, the great majority from the DRC, and also from WHO offices across the African region. Some of these people have been fighting Ebola since the first 2018 outbreak began in the west of the DRC in May. These brave people and colleagues really do make us all proud.”

To date, Ebola has claimed 461 lives in North Kivu and Ituri provinces, and 258 people have recovered from the illness, which attacks the immune system, causing internal-bleeding and major organ damage, if unchecked.

Dr. Moeti said that although there have been successes in bringing the disease under control in Beni and Mangina, the outbreak continues to affect a wide geographical area. There has also been a rise in the number of reported cases, including in Katwa health zone.

It is 6 months today since 10th outbreak of #Ebola was declared in DR #Congo. I recognize and thank, with deepest respect, our @WHO staff and partners in the field for their courage, commitment and professionalism. They make us all proud. https://t.co/kcioVMudCe pic.twitter.com/fHnjviGt0E

In addition to nine treatment centres, WHO has traced more than 45,000 people who have come into contact with suspected Ebola sufferers.

More than 30 million people have been screened at the country’s borders and vaccinations have also begun in neighbouring South Sudan and Uganda.

Insecurity remains one of the biggest obstacles stopping health-workers from reaching those at risk in the vast country, in an area where more than 100 armed groups operate.

“The situation in North Kivu is actually relatively calm compared to the pre-election period, and obviously calm is a relative term in North Kivu and Ituri, there’s a constant threat of violence and attack from non-government forces,” said Dr. Mike Ryan, Assistant Director-General for Emergencies at WHO.

“But I would echo Dr. Moeti’s thanks to our colleagues in MONUSCO (the UN’s stabilization mission in DRC) and the Force Intervention Brigade who continue to provide active defence for Beni, Butembo and surrounding areas.”

An additional obstacle to healthworkers is suspicion among communities. Despite the challenges, major advances are being made in tackling DRC’s worst Ebola outbreak, helped by a new therapy now being tested on patients with their consent.

“This is the first time we’ve managed to deliver so many therapeutics with the higher standard of care into an integrated system for managing patients in a safe and dignified way,” he said.

“The results are encouraging in the sense anecdotally when you look at those results you are seeing on the face of it higher levels of survival”, he said, adding that “we have to be extremely careful, there are lots of biases there regarding the condition of the patient when they arrive…but we are certainly encouraged by the data we’re seeing.” 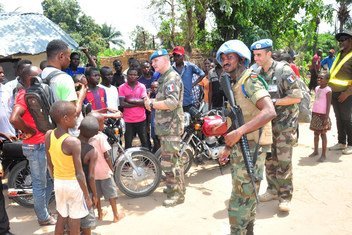 A preliminary UN investigation into a massacre reportedly carried out in western Democratic Republic of the Congo (DRC) last month, reveals that “at least 535 civilians were killed in four attacks”, the UN Mission in the country, MONUSCO, said on Wednesday. 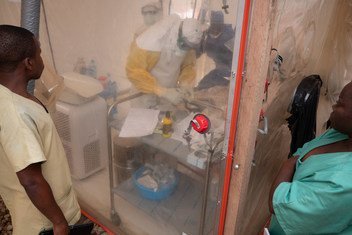