Addressing the problems plaguing Syria and bring years of brutal fighting to an end, requires further “genuine effort” on the part of influential countries, to talk to each other and work constructively, the veteran United Nations Special Envoy for Syria has said.

In his last briefing to the Security Council in the job, Staffan de Mistura reminded the 15-member body of the mandate it entrusted to the UN, to facilitate a Syrian-owned, Syrian-led roadmap for peace.

That process, he said, is “the only way to enable the Syrians to determine their own future” and called on Council members to demonstrate a “renewed sense of common purpose” and concerted action, if 2019 is finally to be the “real turning point” after more than eight years of war.

Towards a new constitution

Mr. de Mistura updated the Council on the challenges that remain to create a new more inclusive constitution for post-war Syria, which was the subject of intensive consultations with senior ministers from Russia, Turkey and Iran earlier this week. One sticking point in determining the “middle third” list of the 50 individuals who will serve on a constitutional committee, alongside the 50 nominated both by the Government, and opposition leaders.

Success will depend on your unity and purpose to empower and support the United Nations, and pressure all parties to begin real dialogue, negotiation and compromise to address the grievances of the Syrian people – Staffan de Mistura, Special Envoy for Syria

Recalling the meeting, he hosted in Geneva, involving the Foreign Ministers of the three countries which are heavily invested in Syria’s future, the UN Special Envoy informed the Council of the “significant” deliberations over the names, saying that “we would not feel comfortable yet giving the UN stamp of legitimacy to all 50 of them as meeting the necessary criteria of credibility and balance.”

“We have seen the loss of experienced experts of excellent credentials who would also have been natural bridge builders,” he explained. “No list will be perfect. But in our assessment, it needs a further review and revision.”

Looking back at his tenure as the Special Envoy and UN efforts to alleviate Syrians’ suffering, Mr. de Mistura said that lives have been saved and some progress on humanitarian access “but nowhere near what civilians desperately needed and asked for, and despite hundreds of thousands being killed and millions displaced.”

Talks were convened between the Government and opposition, and the UN also helped the process of uniting the opposition, “but we have not yet had the parties really recognize each other as interlocutors with whom they must do business and actually negotiate, let alone reach agreements.” He said the involvement of Syrian women and civil society in the political process “is still constantly challenged.”

Noting that he “deeply regrets” that so much remains to be done to silence the guns, the UN Special Envoy said that the “Security Council should share that regret too.”

In his final address, Mr. de Mistura, once again urged the Security Council to remain united in support of UN efforts, and impress on all parties, the need for compromise. “Make no mistake: as with my predecessors and me, [my successor’s] success will depend on your unity and purpose to empower and support the United Nations, and pressure all parties to begin real dialogue, negotiation and compromise to address the grievances of the Syrian people and implement Council resolution 2254.” 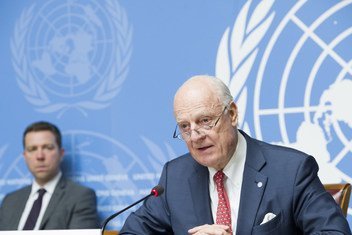 Efforts to establish a constitutional committee for Syria are worth going the “extra mile” for, UN Special Envoy Staffan de Mistura said on Tuesday, after meeting the foreign ministers of Iran, Russia and Turkey - guarantors of a fragile ceasefire in the wartorn country – who agreed that it should convene for the first time early next year, in Geneva.