The resolution condemned Hamas for “repeatedly firing rockets into Israel and for inciting violence, thereby putting civilians at risk”, and for its use of resources in Gaza to construct military infrastructure “including tunnels to infiltrate Israel and equipment to launch rockets into civilian areas”.

It specified that further engagement by the UN Secretary-General, and the UN Special Coordinator for the Middle East Peace Process, in efforts to de-escalate the situation in Gaza, was also needed.

A procedural vote held before the main vote on the resolution – calling for the latter to be decided on a two-thirds majority – passed in the chamber, narrowing the odds of the resolution passing successfully: although 87 voted in favour, 58 voted against, with 32 abstentions, meaning that the resolution failed under the two-thirds ruling.

Before the votes, the US Permanent Representative to the UN, said that despite more than 500 General Assembly resolutions condemning Israel, not one condemning Hamas has ever been adopted. She described the two-thirds decision, which passed by just a handful of votes, as “unfair’” adding that the Hamas resolution was an opportunity for States to “do the right thing.”

The Israeli Ambassador, Danny Danon, said that the resolution had been a chance for “UN redemption,” and that those who had voted against it “should be ashamed of themselves.”

A number of States explained their reasons for voting against the resolution. The Saudi Arabian representative stated that, since 1967, Israel has not respected any General Assembly or Security Council resolutions, whilst Kuwait and Iran’s representatives said that the resolution “ignores” and “deflects attention from” the root causes of the conflict.

♦ Receive daily updates directly in your inbox - Subscribe here to a topic.
♦ Download the UN News app for your iOS or Android devices.
Israel-Palestine|Hamas 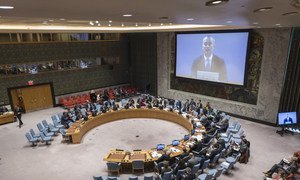 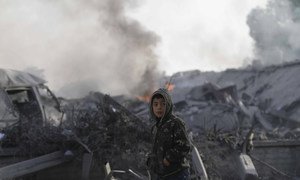