WFP
WFP distribute food near Rukban in Syria where an inter-agency (UN and SARC) convoy arrived on Saturday with more than 70 trucks, including 43 WFP trucks.
15 November 2018
Humanitarian Aid

Following successful delivery of lifesaving aid to tens of thousands of displaced Syrians in the ‘desolate’ area around Rukban camp last week, the United Nations is working urgently to send another convoy of supplies by mid-December, Jan Egeland, Senior Advisor to the UN Special Envoy on Yemen told reporters on Thursday.

Mr. Egeland painted a harrowing picture of the situation in the desert region, where the UN has been trying to reach 40,000 to 50,000 since early this year. Calling it one of the most “desolate places on earth”, he said that between 3 and 8 November, 78 trucks were able to navigate through “some of the most dangerous areas of Syria,” to deliver food, health and sanitary items, and water purification for all the population for at least a month.

At the same time, he said that despite “some rare moments of feeling that we achieved, through humanitarian diplomacy, what we have so many times before failed to,” he had learned of the “horrific protection challenges” people living inside the camp – close to the border with Jordan – faced during a meeting of the UN-backed Humanitarian Task Force in Geneva. 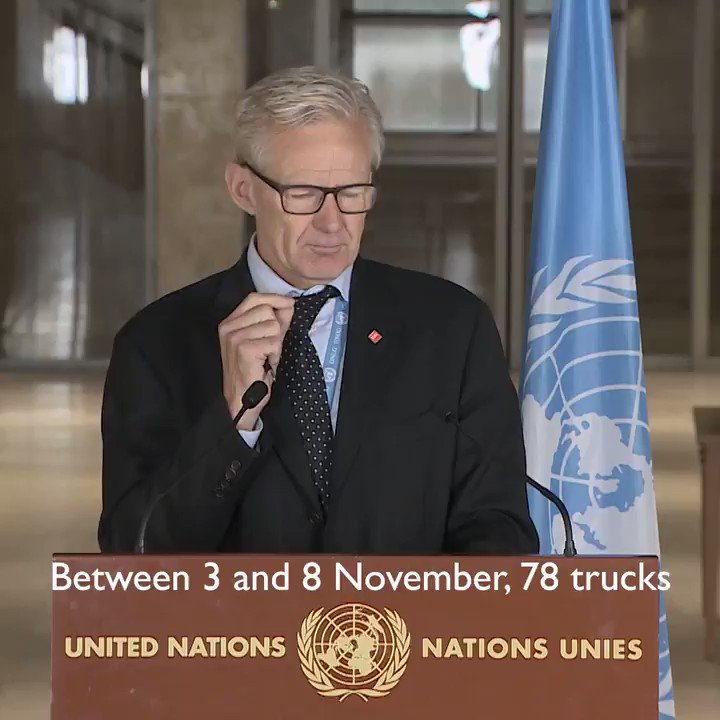 “It really stuck with me the story of the 13-year-old mother […] who was pregnant again. She had delivered once in totally substandard conditions, there is not a single trained doctor active that I know of in the camp.”

“I cannot think of a worse place on earth now for women and children,” he lamented, responding to a question regarding the status of families in the region.

Aside from supplying aid, key conversations and negotiations must take place between the Russia, the United States and Jordan to begin the end of armed resistance in order to “unlock this trap which is now for too many civilians in Rukban,” he urged.

Mr. Egeland shifted to discuss the desperate situation in Idlib, also controlled by armed opposition: “We now celebrate two months without air raids. I feared that this month of November would be the most horrific war month […] it’s been the [quietest] two months for the last five years in Idlib.”

The “forgotten” military campaign in Syria’s east, he said, still sees hundreds of air raids in the Hajin area. He noted there are many Islamic State of Iraq and the Levans (ISIL) fighters, but also 10,000 civilians in this region, where 27,000 have been displaced since the start of the campaign.

One concern for the displaced is that they may end up trapped near a battle zone once they arrive at screening camps, Mr. Egeland explained. “At least once, Islamic State fighters have come and torched such a camp. We told again the coalition to work to immediately have these camps moved out of harm’s way…”

Civilians held by terrorist groups have the same protection under humanitarian law, he said, calling for more action to put a stop on civilian casualties.

During his discussion with reporters Mr. Egeland pleaded: “I ask these armed men: don’t take with you the civilian population as you go down, let’s have sanity prevail for once in Syria.”