In Geneva on Thursday, Osnat Lubrani, the UN Humanitarian Coordinator in Ukraine, briefed UN Member States on the human cost and consequences of the severe humanitarian crisis and called on international donors to urgently increase funding to help vulnerable families through the long harsh winter.

“Thanks to generous support by donors, so far this year more than one million most vulnerable Ukrainians have received vital assistance and protection services,” she said. “But funding is now falling short.”

While humanitarians are racing to prepare for frigid winter temperatures, aid workers have reached people with shelter, food and livelihood support, cash assistance and access to health care and education.

Lack of funds means that the basic needs of millions of men, women and children continue to be denied – UN Humanitarian Coordinator

However, she pointed out, the 2018 Humanitarian Response Plan remains only 36 per cent funded.

“Lack of funds means that the basic needs of millions of men, women and children continue to be denied,” warned Ms. Lubrani.

“I call on the Member States to stand in solidarity with the people of eastern Ukraine and help sustain them through the cold winter, which is compounded by overwhelming needs in the areas of mental health and psychological trauma, protection, mine action, shelter, health, livelihoods, water, sanitation and hygiene,” she asserted.

While commending efforts to improve crossing conditions, Ms. Lubrani stressed that “more needs to be done on both sides during this harsh winter,” at the checkpoints, pointing to the lack of adequate water, sanitation facilities and heating.

With thousands of ceasefire violations every month, shelling, sniper-fire and landmines in eastern Ukraine continue to kill and maim civilians. Since 2014, over 3,000 civilians have lost their lives.

“This year only, we have seen more than 73 incidents affecting critical water infrastructure and if the shelling continues during the winter, people will struggle to keep warm and frequent water interruption increases the risks of communicable disease outbreaks,” Ms Lubrani said, referring to fragile interconnected water and heating systems.

“Civilians and critical civilian infrastructure must be spared and protected according to the international humanitarian law,” underscored Ms. Lubrani, adding: “They are not a target.”

In late February 2014, the situation in Ukraine went from political crisis, to violent confrontation and, later became a full-scale conflict in the east, which has claimed the lives of over 3,000 civilians so far. 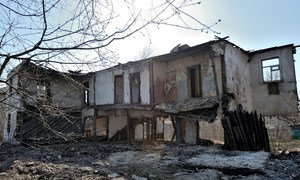 After a lull in fighting in Ukraine over the summer, the last few weeks have seen a sharp rise in civilian deaths, more than half of which are due to landmines and explosive remnants of war, the United Nations top political official said on Tuesday.