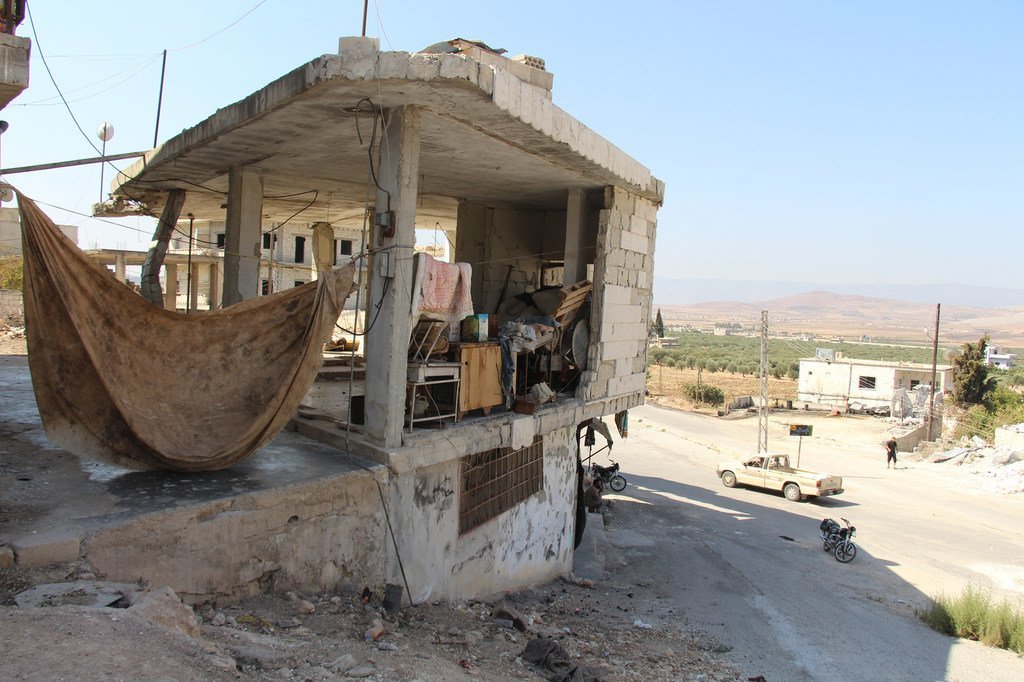 WFP/Photo Library
The humanitarian situation across Syria remains dire and millions across the war-torn country remain dependent on international assistance. Pictured here, a damaged building in Idlib, which is being used as a makeshift shelter.
29 October 2018
Humanitarian Aid

A humanitarian convoy carrying relief aid for tens of thousands of “desperate” civilians in north-eastern Syria who have not received aid since January this year, has been postponed owing to security concerns along its route, the United Nations top humanitarian official said on Monday.

The UN-Syrian Arab Red Crescent convoy from Damascus to Rukban, on the Syria-Jordan border, would have delivered assistance on Saturday to some 50,000 people.

About 10,000 children would also have been vaccinated and other needs in the region assessed.

“The population at Rukban has not received assistance since January this year, and they are increasingly desperate,” Mark Lowcock, the UN Emergency Relief Coordinator, told a Security Council meeting on the humanitarian situation in Syria.

The population at Rukban has not received assistance since January this year, and they are increasingly desperate – Mark Lowcock

“There are continuing reports of children dying due to poor sanitary conditions and a lack of healthcare. This dire humanitarian situation cannot be allowed to continue,” he said.

Turning to Idlib – where a demilitarization agreement was reached between Russia and Turkey in September – Mr. Lowcock called on all actors to protect the “glimmer of hope” offered by the lull in fighting.

“The stakes are high,” he told the Council, “as the alternative is humanitarian suffering on a scale that would overwhelm all ability to respond, devastating a population that is already weakened through years of conflict, displacement and deprivation.”

More than seven years of fighting has left hundreds of thousands of Syrians dead, uprooted millions more and enmeshed the interests of several foreign powers.

Across Syria, over 13 million people continue to depend on humanitarian assistance, of which more than 6 million are internally displaced people who are food-insecure.

In his briefing, Mr. Lowcock informed the Council that although the UN and humanitarian partners continue to reach over five million civilians with life-saving assistance each month, sustained access remains a major problem, especially in areas that recently changed control.

In discussions, Syrian authorities have provided assurances of humanitarian access, he added.

“We look forward to rapid implementation,” he continued, noting that it would allow relief teams on the ground to undertake “essential independent assessments of the situation and see more of who is being helped and how.”

In his briefing, the Mr. Lowcock, also spoke of the UN cross-border operation from Turkey, which continues to reach hundreds of thousands of people in need each month.

“[The deliveries] have been scaled up in recent weeks to ensure prepositioning of assistance as a contingency measure for the event of a military escalation, as well as to provide support for winter.”

Sustaining the cross-border lifeline is critical, he added, calling for an extension of the provisions of the Security Council resolutions 2165 and 2393 which established the delivery mechanisms.

Some US$1.7 billion has been raised in 2018 for the Syria Humanitarian Response Plan, but it remains less than 50 per cent funded.