© UNICEF/Thomas Nybo
On 12 September 2018 in Beni, a UNICEF staff member discusses the best way to protect yourself against Ebola in a conversation with young people living in Beni, Democratic Republic of Congo, after a recent Ebola outbreak.
7 November 2018
Health

The exercise, which began on Tuesday, is centred around five high-risk districts of Uganda that border the DRC (Bundibugyo, Kabarole, Kasese, Ntoroko and Bunyangabu) and involves the administering of 2,100 doses of vaccine to health workers, protecting them against the particular strain of Ebola currently circulating in some parts of DRC.

No cases of Ebola have so far been reported in Uganda, but the authorities are implementing the plan in order to avoid the fatal consequences of previous outbreaks, which saw health workers contract the disease and die as they cared for patients.

WHO said in a statement released on Wednesday that it is “highly likely” that Ugandans in districts near the border will be infected with the virus, due to their close proximity to the epicentre of the outbreak, and high population movements due to trade, social and cultural connections and the relatively easy access to health services.

Dr Yonas Tegegn Woldemariam, WHO Representative in Uganda, referred to the vaccination as a huge step in mitigating the risk of Ebola among health care workers, and assured them that it would provide effective protection.

The deteriorating security situation in the DRC has complicated efforts to get the Ebola outbreak under control: across the country, local populations and humanitarian workers assisting them have come under attacks by armed groups, necessitating the deployment of a large UN peacekeeping mission.

A WHO assessment of the situation in DRC released on 22 October, warned of the potential for the virus to spread into Rwanda, South Sudan and Burundi, as well as Uganda, and called on these countries to step up readiness efforts.

Other preparatory activities underway in Uganda to prevent the spread of the disease include health facility and community-based surveillance; collection and testing of blood samples; and cross-border monitoring.

UN Peacekeeping, WHO chiefs praise courage of Ebola responders, at epicentre of outbreak

Both WHO Director-General Tedros Adhanom Ghebreyesus, and Peacekeeping chief Jean-Pierre Lacroix were in the epicentre of the outbreak area on Wednesday, Beni, in DRCs North Kivu district.

They met local authority leaders, UN agencies, civil society and first responders to assess the situation on the ground and to discuss ways to strengthen the response. So far there have been 311 reported cases of Ebola since the outbreak in the restive east began. 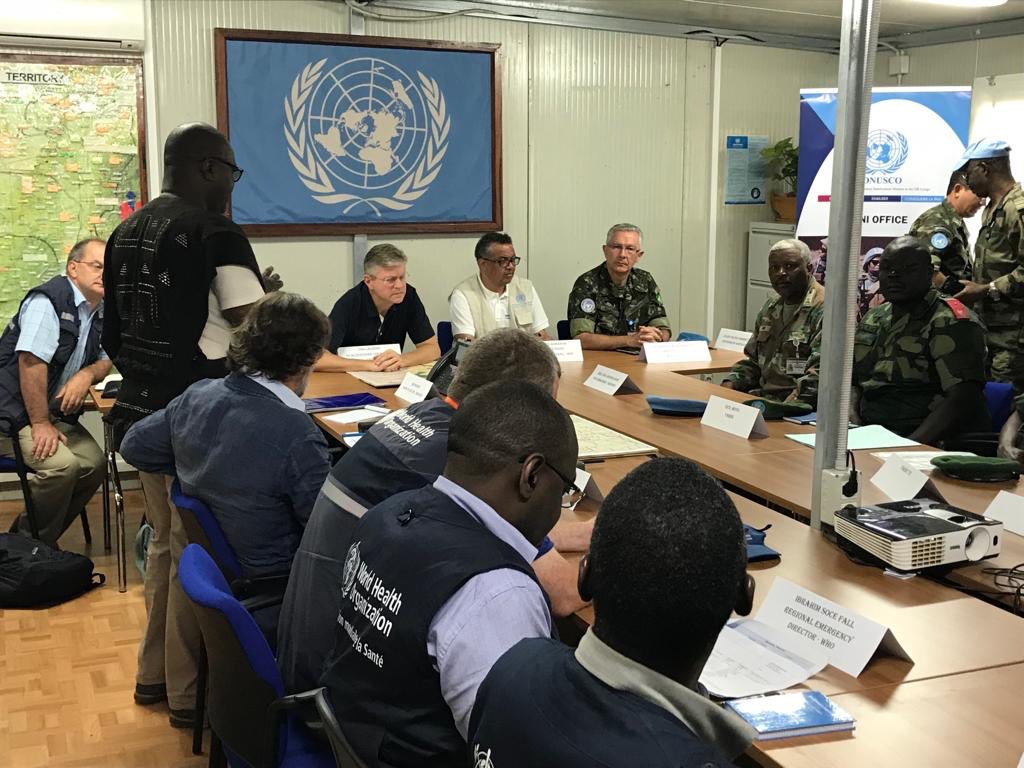 The Director-General and Mr. Lacroix praised the responders’ courage and determination and emphasized the numerous challenges, including security, particularly for women.

Mr. Lacroix said that health workers in the affected zones do crucial work amidst a difficult security environment and that the UN Mission in the country (MONUSCO) is actively supporting the Government to improve security.

"It is first and foremost the work of a very close-knit team comprised of WHO, MONUSCO and other agencies with the DRC government authorities who are very mobilized," he said. "It is starting to produce results even if , as the Director General of the WHO said earlier, there are still cases every day, but the slope suggests that we will be able to contain the epidemic.  The problem is that the security environment has worsened."

He added that the continuing actions of armed groups "calls for a stronger closely coordinated response, and we are working in a very coordinated manner with the Congolese security forces, but the adversary is a more difficult adversary that knows the ground that is blending into the population.  The peculiarities of the terrain also make the operations very complex. We are working to improve the effectiveness of our response, the means, the training, and the knowledge of the groups.  I think we will obtain results."

Mr. Tedros said the work being done around the clock to end Ebola made him proud and confident that the outbreak would be defeated despite the numerous challenges.

On Thursday, the top UN officials will travel to Goma and then to Kinshasa, where they are expected to hold a press conference.

♦ Receive daily updates directly in your inbox - Subscribe here to a topic.
♦ Download the UN News app for your iOS or Android devices.
ebola|WHO 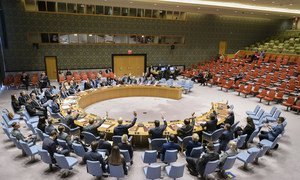 The United Nations Security Council has voiced “serious concern” over the impact of deteriorating security situation in the Democratic Republic of the Congo (DRC) on the response to the deadly Ebola outbreak and fears that the virus could spread further into the country and the wider region. 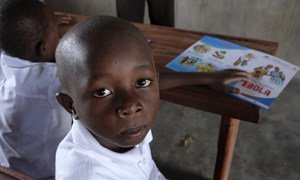 The United Nations Secretary-General, António Guterres said on Monday he is “outraged by the continued killing and abduction of civilians by armed groups” near Beni, in the Democratic Republic of the Congo (DRC)’s North Kivu region, which has been grappling with an Ebola outbreak since August.