WHO warns against potential Ebola spread in DR Congo and beyond

WHO/Lindsay Mackenzie
Marie-Roseline Darnycka Bélizaire, an epidemiologist with the World Health Organisation, rides through the forest near Itipo on the way to a follow-up visit with a contact.
11 September 2020
Health

Ebola is spreading in a western province in the Democratic Republic of the Congo (DRC), raising fears that the disease could reach neighbouring Republic of Congo and even the capital, Kinshasa, the World Health Organization (WHO) said on Friday.

The outbreak in Equateur Province emerged in early June and has now spread into another of its 17 health zones, bringing the total number of affected zones to 12. So far, there have been 113 cases and 48 deaths.

WHO #Ebola vaccination teams travel through the thick forest to reach a remote village in Equateur #DRC. They have little time to waste, so they travel by motorbike for greater speed. pic.twitter.com/AJ4Mjo1Nbi

“The most recently affected area, Bomongo, is the second affected health zone that borders the Republic of Congo, which heightens the chances of this outbreak to spread into another country”, said WHO Spokesperson, Fadéla Chaib, underlining the need for cross-border collaboration and coordination.

The risk of the disease spreading as far as Kinshasa is also a very real concern for the UN agency.  One of the affected areas, Mbandaka, is connected to the capital by a busy river route used by thousands every week.

This is the second Ebola outbreak in Equateur Province and the 11th overall in the DRC, which recently defeated the disease in its volatile eastern region after a two-year battle.

This latest western outbreak first surfaced in the city of Mbandaka, home to more than one million people, and subsequently spread to 11 health zones, with active transmission currently occurring in eight.

The health zones all border each other and cover a large and remote area often only accessible by helicopter or boat.

Managing response logistics in Equateur is difficult as communities are very scattered.  Many are in deeply forested areas and reaching them requires travelling long distances.

In some areas, community resistance is also a challenge, Ms. Chaib added.

"We learned over years of working on Ebola in DRC how important it is to engage and mobilize communities. WHO is working with UNICEF in engaging religious, youth and community leaders  to raise awareness about Ebola," she said.

The situation has been further complicated by a health worker strike that has affected key response activities for nearly four weeks.

Locally based Ebola responders have been protesting against low salaries as well as non-payment since the start of the outbreak.

Although some activities have resumed, many are still on hold, making it difficult to get an accurate picture of how the epidemic is evolving and which areas need the most attention.

WHO and partners have been on the ground since the early days of the outbreak.

More than 90 experts are in Equateur, and additional staff have recently been deployed from the capital, including experts in epidemiology, vaccination, community engagement, infection prevention and control, laboratory and treatment.

However, the UN agency warned that response is “grossly underfunded”.  WHO has provided some $2.3 million in support so far, and has urged donors to back a $40 million plan by the Congolese government.

This latest Ebola outbreak is unfolding amidst the COVID-19 pandemic.  As of Friday, there were more than 10,300 cases and 260 deaths across the vast African nation.

While there are several similarities in addressing the two diseases, such as the need to identify and test contacts, isolate cases, and promote effective prevention measures, Ms. Chaib stressed that without extra funding, it will be even harder to defeat Ebola.

♦ Receive daily updates directly in your inbox - Subscribe here to a topic.
♦ Download the UN News app for your iOS or Android devices.
WHO|Democratic Republic of the Congo|ebola|COVID-19 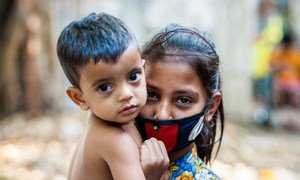 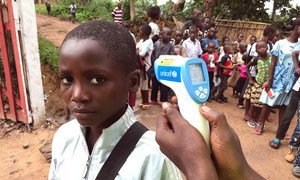 The World Health Organization (WHO) and partners are concerned about the growing Ebola outbreak in the northwestern province of Equateur, in the Democratic Republic of the Congo (DRC), as they face critical funding gaps amid the COVID-19 pandemic, the UN health agency said on Thursday