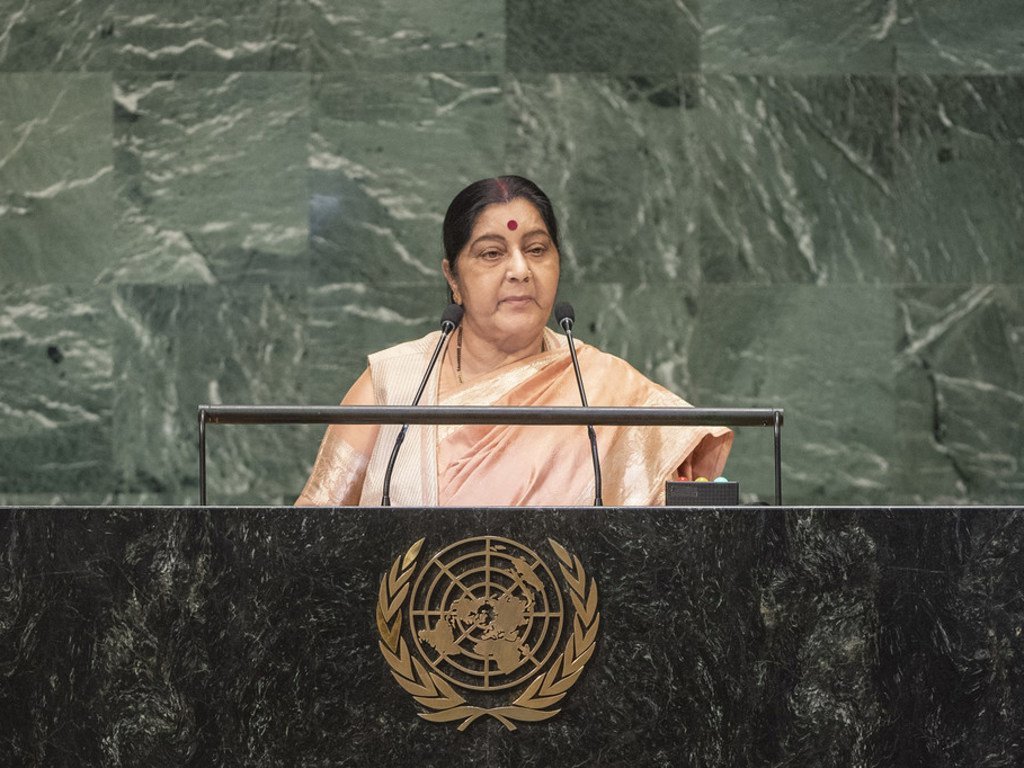 India is “totally committed” to achieving the 2030 Sustainable Development Goals (SDGs) said Foreign Minister Sushma Swaraj on Saturday, addressing the United Nations General Assembly’s annual debate, promising to get there ahead of time, thanks to an “unprecedented economic and social transformation”, now underway.

Ms. Swaraj said that it had been a “common refrain” since the SDGs were agreed by 193 countries in 2015, that it would only be possible to reach the 17 Goals, if India was fully onboard.

“I assure this august gathering…that India will not let you fail”, she said, adding that under Prime Minister Narendra Modi, the “world’s biggest exercise in poverty elimination and social transformation” – in line with key goals on poverty, equality and economic development – was already showing results.

She pointed to the recent inclusion of more than 320 million Indians in the formal banking system, the launch only last week of “the world’s biggest health insurance programme”, and a housing scheme which was on target to provide 21 million new homes by 2022. At the heart of it all, she said, was the “radical” empowerment of women, with “the welfare of women” at the core of all socio-economic development initiatives.

Turning to what she called, “the existential threats of climate change and terrorism”, Ms. Swaraj urged developed nations who had “exploited nature for their immediate needs” to help “lift the deprived, with financial and technical resources”, to reduce greenhouse gas emissions in line with the Paris Agreement on climate change.

In the fight against international terrorism, she accused neighbouring Pakistan of duplicity: “Pakistan’s commitment to terrorism as an instrument of official policy has not abated one bit”, she claimed.

On the state of peace talks between the two States, she said that it was “a lie” that India had been responsible for sabotaging the process. “Talks with Pakistan have begun many times. If they stopped, it was only because of Pakistan’s behaviour,” she said, claiming that it was Pakistan sabotaging any hopes of dialogue. Even this past week, she said she had been obliged to cancel a meeting suggested by Pakistan’s Foreign Minister at UN Headquarters in New York, after “terrorists” had allegedly killed three Indian soldiers, asking delegates in the Assembly: “Does this indicate a desire for dialogue?”

Finally, Ms. Swaraj moved on to reform of the United Nations, which is a key priority of Secretary-General António Guterres. “Reform cannot be cosmetic,” she said: “We need change to the institution’s head and heart to make both compatible to contemporary reality.”

She said “the importance, influence, respect and value of this institution is beginning to ebb” but also made a rousing defence of multilateralism, saying that reform was essential if it was to thrive.

“We will never weaken the multilateral mechanism. India believes that the world is a family, and the best means of resolution is shared discourse…The UN cannot be run by the ‘I’, it only works by the ‘We’”.