The Universal Declaration of Human Rights (UDHR) is 70 this year and since then, it’s helped improve the rights of vulnerable women, children and men worldwide. The “Good Human Rights Stories” initiative was launched by 14 countries and the European Union to highlight the strengthening of rights, and inspire nations worldwide to follow suit.

At a high-level event held in that spirit on the sidelines of the UN General Assembly, in New York, on Thursday, UN Secretary-General António Guterres, drove home that point: “We should never forget the profound progress that has been made over the decades – and, indeed, that is happening as we speak.”

“Progress in one corner of the world plants a seed of hope in another,” he stated, referencing his own personal story. “I grew up under the Salazar dictatorship in Portugal and did not know democracy until I was twenty-four years old…But it was the human rights struggles and stories of others around the world that inspired and moved us to believe in change at home.”

“In many countries, things are moving in the right direction, sometimes not quickly enough, sometimes it’s not perfect, but nevertheless, they are moving and the broader impact is clear,” she said.

The event went on to showcase several initiatives and progress made to strengthen human rights in various countries, including the promotion of diversity in Indonesia, the role played by civil society in Korea, new legislation for gender equality in Tunisia, and prison reform in Georgia, to name a few.

On Wednesday, the UN held another high-level event marking the 70th anniversary of the UDHR, to highlight how making the text a reality, can be a powerful tool for nations across the world to prevent conflict and poverty.

♦ Receive daily updates directly in your inbox - Subscribe here to a topic.
♦ Download the UN News app for your iOS or Android devices.
human rights|General Debate 73

World leaders joined with United Nations entities on Thursday to reaffirm their continued personal commitment to support efforts to combat sexual exploitation and abuse across the Organization. 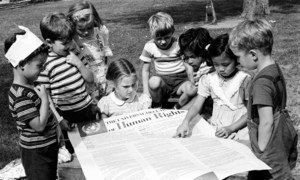 As the world celebrates the 70th anniversary of the adoption of the Universal Declaration of Human Rights (UDHR) this year, the United Nations General Assembly dedicated a high-level event on Wednesday, to discussing how respect for human rights in societies can help advance peace and sustainable development.