As the world celebrates the 70th anniversary of the adoption of the Universal Declaration of Human Rights (UDHR) this year, the United Nations General Assembly dedicated a high-level event on Wednesday, to discussing how respect for human rights in societies can help advance peace and sustainable development.

Adopted in Paris in 1948, the UDHR was drafted in the aftermath of the Second World War and the Holocaust. The text describes every individual’s inalienable rights, through 30 carefully written articles.

Describing its “revolutionary impact”, UN Secretary-General António Guterres said the Declaration “has permeated policies and constitutions, from the global level to national and regional frameworks”. He added that it had “unleashed the power of women’s full participation”, as well as “spurred the fight against racism, xenophobia and intolerance.”

Despite these important achievements, “that progress is under threat,” regretted Michelle Bachelet, UN High Commissioner for Human Rights. “In many countries, the fundamental recognition that all human beings are equal, and have inherent rights, is under attack. And the institutions set up by States to achieve common solutions, are being undermined.”

This lack of recognition is hampering the achievement of the 17 Sustainable Development Goals and remains too often the root cause of various conflicts around the world, he said.

“We have ample evidence that state-sponsored human rights abuses are a sign of weakness, not strength. They are often precursors to conflict and even to collapse,” stressed UN chief Guterres.

“Every step towards greater implementation of the human rights agenda is an act of prevention – strengthening the bonds between communities, and reinforcing inclusive development and peace,” said Ms. Bachelet. “Every step away from it tugs us down, towards suffering, injustice, hatred and conflict”.

Mr. Guterres, who launched on Monday a bold UN-wide strategy for the empowerment of global youth, entitled “Youth 2030”, stressed the important role that young people can play in the advancement of human rights worldwide.

“There is a special place in my heart for young women and men who are speaking out for social justice”, he said, urging young people to bring their “energy and passion”, to challenge the ways that things are being done and “to take up the torch for our common humanity”.

“You are the true custodians of the Universal Declaration of Human Rights and the guarantee that it will not succumb,” he added. 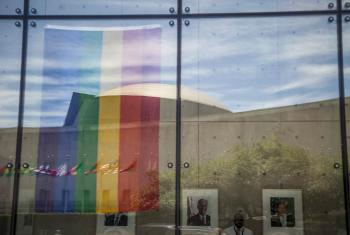 Violence against the LGBTI community: UN focuses on ‘need to challenge hatred’

As the United Nations celebrates 70 years since the Universal Declaration of Human Rights, a high-level event on extrajudicial, summary and arbitrary killings of lesbian, gay, bisexual, transgender or intersex (LGBTI) persons around the world, heard event moderator and Executive Director of OutRight Action International, Jessica Stern, describe the challenges facing the community as nothing short of a “global crisis”.