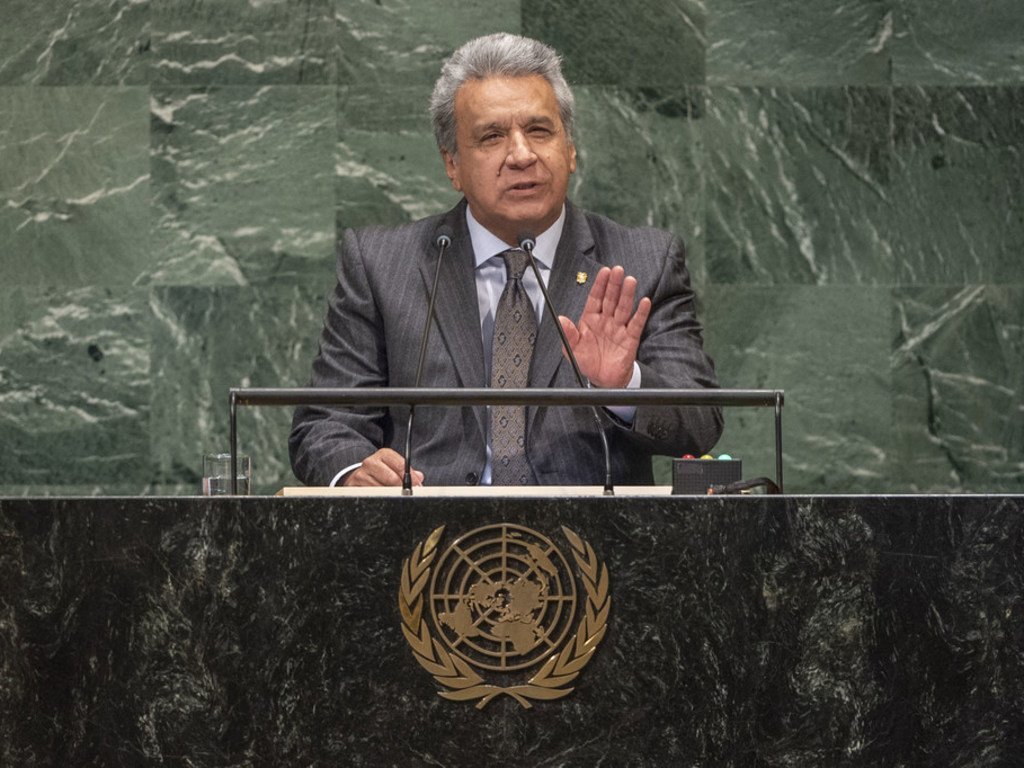 Taking the podium at the United Nations General Assembly’s annual debate, Lenin Moreno Garces, President of Ecuador, opened his address stressing that the principal of “cause and effect” can provide an opportunity for societies to change their circumstances.

Noting that international policies that are born at the UN, “the most important of the world forums,” he said that the international community could help “conceive history as something that can be modified.”

Mr. Morena Garces cited deprived, abandoned and suffering people as “part of the daily landscape,” saying politics are successful when they serve everyone, especially “the poorest and the abandoned.”

The President introduced his Government’s plan, ‘A Lifetime,’ as serving the entire life cycle of his people from health to housing, and from women’s advancement to elderly care.

He stressed the need of fulfilling commitments, beginning with out the 2030 Agenda for Sustainable Development.

“The more we strive for our Nations – United – to touch people’s lives, we will strengthen the future,” said the President, noting the importance of multilateralism.

He shared his personal story of suffering an assault 20 years ago that cost him the mobility of his legs, saying “I see the world from the height of the heart,” referring to his stature in a wheelchair.

“This is not just my story, but that of one billion people in the world,” the President continued, calling the UN Convention on the Rights of Persons with Disabilities, and its optional protocol, “the best guarantee that, together, we will develop a commitment.” He pointed out that for the next two years, Ecuador would take on the presidency of the Conference of States Parties to the Convention.

He asserted that his country would “contribute to the promotion and protection of the rights of people with disability… so that we are a truly inclusive United Nations,” not just physically but also their rights – in discussions, resolutions and UN initiatives.

Turning to migration, he drew attention to the 6,000 Venezuelans that arrive to Ecuador each day, including children with measles, diphtheria and polio, urging the Venezuelan’s to “resolve their crisis with frank, inclusive dialogue.”

He noted that the Global Migration Pact was up for adoption in December, in Marrakesh, saying “We cannot let that pact become a dead letter.”

“Inclusion has no borders,” and all people have the right to life and happiness, underscored Mr. Moreno Garces.

He flagged that the UN was created to preserve the human rights of the world’s citizens.

“Rights can only be guaranteed, in the context of solid institutions, with ample freedom of expression… fundamental elements of democracies,” he said, acknowledging the UN’s “immense responsibility” and assuring Ecuador’s support to the UN.

♦ Receive daily updates directly in your inbox - Subscribe here to a topic.
♦ Download the UN News app for your iOS or Android devices.
Ecador|General Debate 73