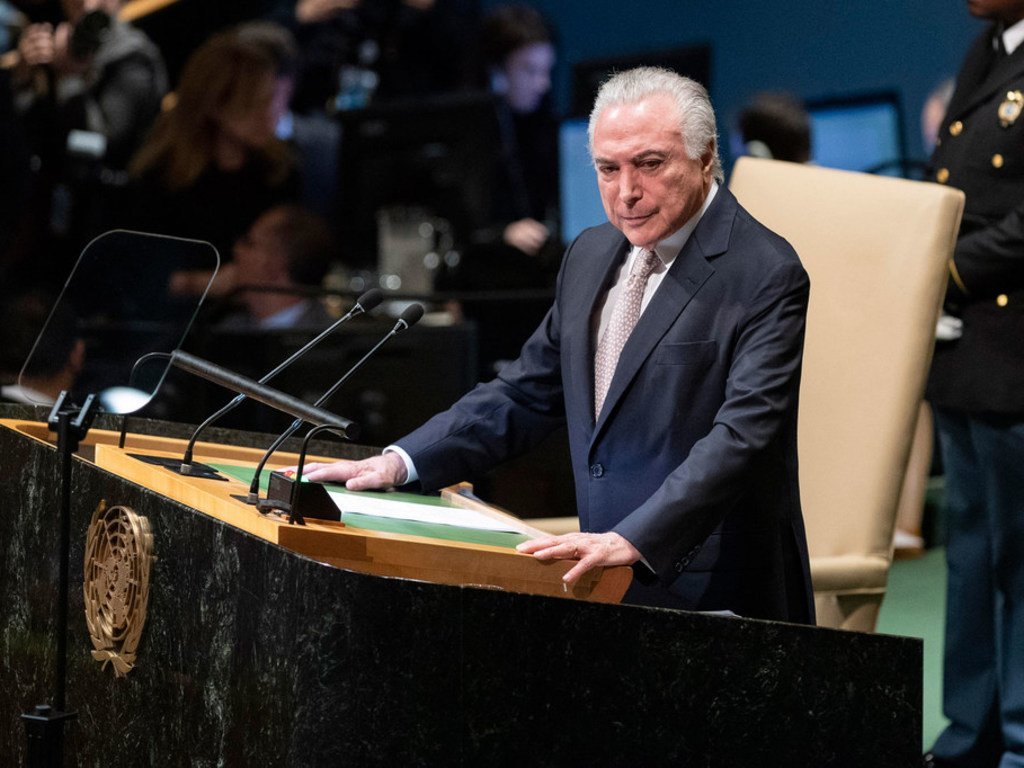 The first Head of State to address the seventy-third general debate of the United Nations General Assembly, Michel Temer, President of Brazil, denounced the rising tide of isolationism, intolerance and unilateralism that was challenging international order.

“We live in times clouded by isolationist forces. Old intolerances are re-emerging. Unilateral relapses are less and less the exception.But these challenges should not – cannot – intimidate us,” the President said.

Saying that collective order “has served the greater causes of humanity,” Mr. Temer noted that “imperfect as it may be,” we must defend its integrity.

He emphasized that isolationism be responded to with “more openness, more integration,” saying that common development depends on international flows of trade and investment; and new ideas and technologies.

By opening to others “we will build an effectively shared prosperity,” he stated.

The said that deepened integration mechanisms between Brazil and Mercosur have yielded "concrete results…with a direct impact on the day to day.”

Saying that Brazil is pursuing a universalist foreign policy, he underscored,” It is with openness and integration that we achieve harmony, growth, progress.”

He said that his country responds to intolerance “with dialogue and solidarity.”

Acknowledging that violations of international norms persist in the most diverse quarters, he asserted that Brazil has been working to preserve democracy and human rights in Latin America.

He highlighted that Brazil has received tens of thousands of Venezuelans who have left their country “in search of dignified living conditions,” and, with the collaboration of the Office of the UN High Commission for Refugees (UNHCR), has built shelters to support them.

“We issue documents that enable them to work in the country. We offer school for children, vaccination and health services for all. But we know that the solution to the crisis will only come when Venezuela rediscovers the path of development,” the President detailed.

Calling the UN “the home of understanding,” he urged everyone to strengthen the Organization and to make it more “legitimate and effective,” including by reforming the Security Council to reflects the current world.

“We need to reinvigorate the values ​​of diplomacy and multilateralism,” Mr. Temer said, noting that he was the first head of State to sign the Treaty on the Prohibition of Nuclear Weapons.

He also enumerated Brazil’s actions in support of the 2030 Agenda for Sustainable Development and the Paris Agreement – “real milestones” that “put us on the path of economic growth with social justice and respect for the environment.”

He reassured the Assembly that Brazil will remain “a firm ally of cooperation among nations.”

♦ Receive daily updates directly in your inbox - Subscribe here to a topic.
♦ Download the UN News app for your iOS or Android devices.
brazil|General Debate 73