At UN, countries pledge to be guided by Mandela’s legacy in working for a better world 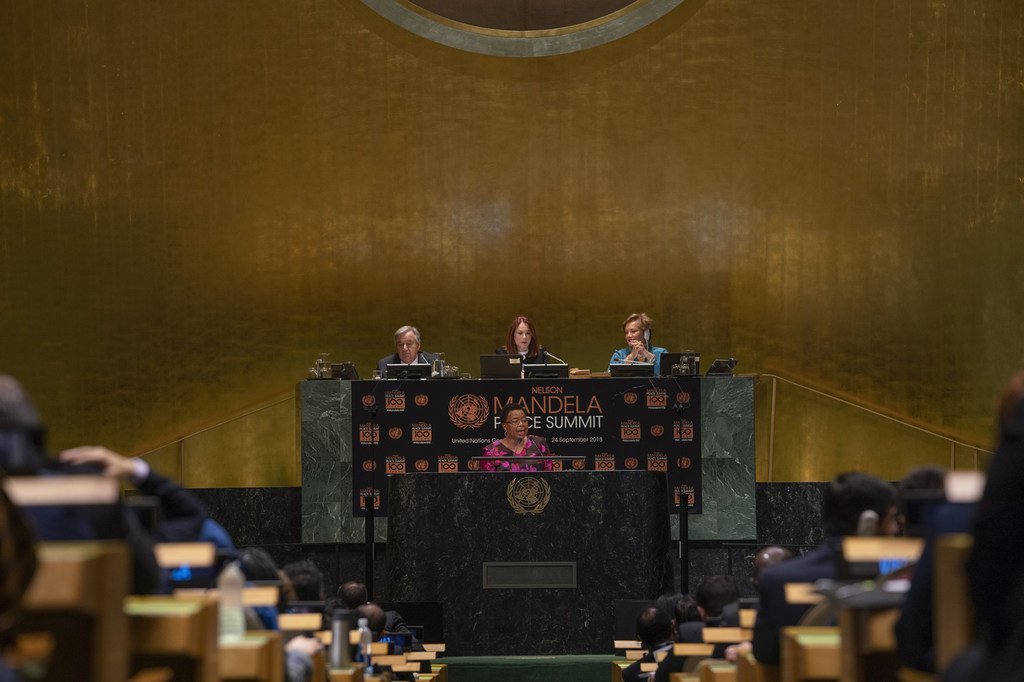 The United Nations General Assembly on Monday honoured Nelson Mandela with a pledge to build a just, peaceful and prosperous world and to revive the values for which the former South African President and anti-apartheid campaigner stood.

Member States, many represented by their heads of State and government, also reiterated the importance of the 2030 Agenda for Sustainable Development and said that they remain committed to achieving sustainable development in its three dimensions – economic, social and environmental – in a balanced and integrated manner.

Addressing the Summit, UN Secretary-General Antonio Guterres spoke of the growing pressure against human rights around the world, and urged everyone to draw inspiration from Nelson Mandela’s wisdom, courage and fortitude, to face the challenges.

“[That] is the only way to build the just, peaceful and prosperous world envisioned in the United Nations Charter, the Universal Declaration of Human Rights and the 2030 Agenda for Sustainable Development,” said Mr. Guterres.

“Madiba was a global citizen whose legacy must continue to guide us,” he added.

Gifted by South Africa to the UN, the life-size statue shows Madiba with his arms outstretched and bears his warm and broad smile.

Speaking at the unveiling, Secretary-General Guterres highlighted Mr. Mandela’s humility as a hallmark of his greatness.

“When he achieved the pinnacle of power as president of his beloved country, Madiba set an example that still resounds throughout Africa and the world – he stepped down after one term, confident in the durability of South Africa’s newfound democracy … He did not pursue power for its own sake, but simply as a means of service,” said the UN chief.

Also speaking at the unveiling, Ms. Espinosa recalled Mr. Mandela’s first landmark speech at the UN, in 1994, in which he spoke of the interdependence of all nations and asked what can and must leaders do to ensure that democracy, peace and prosperity prevail everywhere.

“It is my hope that the placement of this statue – within the physical boundaries of the UN territory – will serve as an inspiration and reminder to all Member States,” added the Assembly President.

“A reminder that our differences are to be celebrated; that our work is wholly and unreservedly for the people for whom we serve; and that our efforts, in whatever form they take, should always be guided by the inspiration and the promise that Mandela has left us.”

♦ Receive daily updates directly in your inbox - Subscribe here to a topic.
♦ Download the UN News app for your iOS or Android devices.
peacebuilding|General Debate 73