“He stands today as a beacon for universal values -- peace, forgiveness, humility, integrity, passion, respect and service,” said UN Secretary-General António Guterres. “Madiba showed us that these are not just words or vague ideals, but concrete actions that we can all take.”

In his tribute, the UN Chief quoted the anti-Apartheid leader’s declaration that “overcoming poverty is not a gesture of charity.  It is an act of justice.  It is the protection of a fundamental human right, the right to dignity and a decent life.”

“Let us act on Madiba’s words,” said Mr. Guterres. “Let us recall all the promises we have made – in the Charter, the Universal Declaration of Human Rights and the 2030 Agenda – and let us commit to honour our pledges. Let us work for the better world we know can exist,” he added, calling on the world to “persevere with commitment and conviction”.

The UN Chief went on to highlight the 2030 Sustainable Development Agenda, the international community’s “roadmap” for creating a better world: “At its heart is a promise to end all forms of poverty and leave no one behind,” he said, noting that “we have come a long way, but we still have a long way to go.”

The prophet is no longer with us. But his teachings are. And we need them – now, more than ever - Miroslav Lajčák, General Assembly President

The President of the UN General Assembly, Miroslav Lajčák, focused on the lessons that Madiba taught the world on the importance of dialogue, peace and tolerance.  “He showed us that dialogue and negotiation should be pursued relentlessly – no matter how deep the divides, or strong the hurt,” he said, regretting that “too often we have let peace slip through our fingers. And we have waited until it was gone, to act”.

“The prophet is no longer with us. But his teachings are. And we need them – now, more than ever,” he stated, denouncing the current global rise in intolerance, hate, inhumanity, racism, prejudice and discrimination. “We cannot be silent in the face of them. We need to push back harder – and to speak out louder than ever,” he appealed. 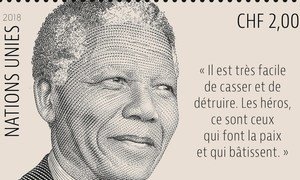 At the event, which took place at UN Headquarters in New York, tributes were also delivered by leading film actor Forest Whitaker, Special Envoy for Peace and Reconciliation for the UN Educational, Scientific and Cultural Organization (UNESCO), who highlighted Nelson Mandela’s ability to “turn enemies into partners”, and by Edna Molewa, South Africa Minister of Environmental Affairs, who cited his sense of “humility, forgiveness and compassion” as qualities that are “sorely needed in the world today.”

A centennial stamp was unveiled during the event, with another quote from Nelson Mandela: “It is easy to break down and destroy. The heroes are those who make peace and build.” 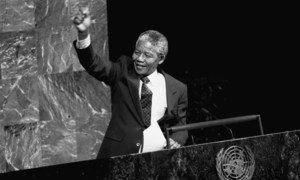 Taking stock of his “vast” legacy for mankind, the United Nations will mark 100 years since the birth of the late anti-Apartheid activist, Nelson Mandela, on Wednesday. 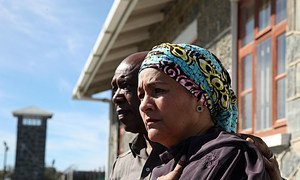 Reflecting on the legacy of Nelson Mandela, United Nations Deputy Secretary-General Amina Mohammed called for investment in women and girls, decrying gender inequality as perhaps the most pervasive disparity around the world.