Under his stewardship, leaders committed their countries to meeting the Millennium Development Goals by 2015 - the precursor to today’s Sustainable Development Goals, and he was awarded the Nobel Peace Prize on the way.

A UN agenda item since 1960, Timor-Leste became the first new country of the new millennium and the UN handed authority over to the democratically elected government there, ending the need to maintain a mission there.

But there were dark days as well, none more so during his time in office than the  terrorist attack on the UN headquarters building in the Iraqi capital, Baghdad, 15 years ago last month, that claimed 22 lives and, put an end to the assumption that serving under the UN flag would ensure safety.

But in addition to the many lives he touched throughout the world, former UN chief Kofi Annan had a profound impact on the staff of the Organization he led. Click on the tabs below to read the recollections of two leading UN staffers who worked with him closely, and knew him well.

He was fun to work for as well as inspiring – Fred Eckhard, spokesperson

Fred Eckhard, spokesperson for the late Secretary-General, recalled meeting Kofi Annan for the first time, long before his rise through the ranks to head the Organization.

With Pérez de Cuéllar at the helm and then-US President Ronald Reagan leading a strong conservative majority in Congress, intent on reducing contributions to the UN, Mr. Eckhard, himself an American, was hired by the UN Information Department. He was called in to brief the Budget Director, meeting Mr. Annan for the first time.

Later, during “an explosion of peacekeeping” missions, Mr. Eckhard became the Spokesman for Namibia, and then for Yugoslavia. “Now I’ve got the new Director of Peacekeeping looking over my shoulder, and that’s Kofi Annan”, he said at that time.

Back at Headquarters, after serving both those missions, journalists asked that Mr. Eckhard give the daily peacekeeping briefings, citing his “firsthand experience.” 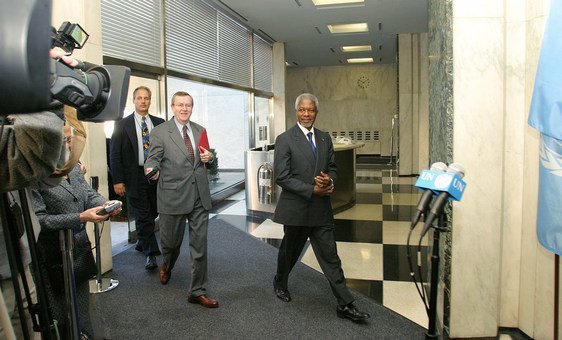 Secretary-General Kofi Annan, approaches a press stakeout at the UN Headquarters, in New York; at his left is Fred Eckhard, his spokesperson. UN Photo/Stephenie Hollyman

“Boutros then began to see Kofi as a threat, and I was ordered to stop briefing on Peacekeeping,” the former Spokesperson said, so Mr. Annan hired him in the Peacekeeping Department as the Liaison with Troop-Contributing Countries.

After a year, Mr. Boutros-Ghali offered him a promotion if he agreed to stay in the Spokesman’s Office.

“So, I saw Boutros on one hand, I saw Kofi on the other, and I said, ‘I’m going with this guy,’” indicating Mr. Annan.

If Boutros been reelected, Mr. Eckhard said his UN career would have been finished.

“But, as it turned out, no one expected it, Kofi was elected, and he made me his Spokesman,” Mr. Eckhard stated, kicking off a long relationship of trust.

He began briefing Mr. Annan each morning as he entered the building, walking together from the basement, taking the elevator up to the 38th floor, down the corridor and into his office, discussing the morning news reports and the day’s issues.

“And, believe it or not, in eight and half years, he never once told me what to say to the press,” Mr. Eckhard maintained.

And he trusted others as well.

And, believe it or not, in eight and half years, he never once told me what to say to the press

The former spokesperson recalled when Shashi Tharoor, now a politician back home in India, was the UN Communications Director, how he would send cables to the field signing for Kofi Annan, “because Kofi trusted him to make the judgement, and Shashi said he grew so much with this freedom.”

“And I think everyone felt that way who worked for him,” he continued. “Kieran Prendergast, who was his Under-Secretary-General for Political Affairs, told me that Kofi trusted people before, or until, they prove themselves unworthy of that trust. Which, in the UN, is unusual. It’s usually the other way around.”

Mr. Eckhard felt that his former boss endeared himself to many by the way he did business.

“Other Secretaries-General tended to have this little insider circle of people of their own nationality,” he said. “Kofi had a broad circle of people he consulted, and he picked people whom he got to know, he thought were interesting - thought brought something to the table, as a part of his staff.

And on a more personal note, the former spokesperson said the Mr. Annan was “secure, confident, serene, comfortable in his skin,” and when he talked “he didn’t just talk to you about work. He always asked about your spouse, about your kids, and very often remembered their names”.

“He was fun to work for as well as inspiring,” Mr. Eckhard concluded.

UN Photo/Stephenie Hollyman
Left to right: Secretary-General Kofi Annan goes over a speech on Iraq with Edward Mortimer, Director of Communications and Head of Speechwriting Unit; Salim Lone, Director of the News and Media Division, Department of Public Information; and Fred Eckhard, Spokesman for the Secretary-General. March 2003.

Edward Mortimer served as former Secretary-General Kofi Annan’s speechwriter and communications director. He described Mr. Annan’s leadership style as “not sort of banging tables and shouting or beating your chest, but bringing people together, and saying we are all on this same planet together.”

“We sink or swim together,” he asserted. “Be it climate change, be it mass epidemics, be it hunger, poverty, or be it very large-scale atrocities and violations of human rights.”

“I think that is a lesson that the world still needs to learn, but the fact that people are still mourning Kofi Annan so strongly, indicates that there are many people in the world who realize that that’s what’s missing, and that that’s the kind of leadership that’s needed today.”

Mr. Mortimer believed that everyone who knew Kofi Annan and worked with him would say that he was an extraordinarily nice person to work for, he was very kind and considerate, and he knew how to get the best out of people.

“I think that this sort of remarkable inner strength and calmness came partly from the very strong relationship he had with his wife, Nane, who travelled with him on many of his trips around the world,” Mr. Mortimer said, noting that her “smiling, cheerful presence at his side added something important to his leadership.” 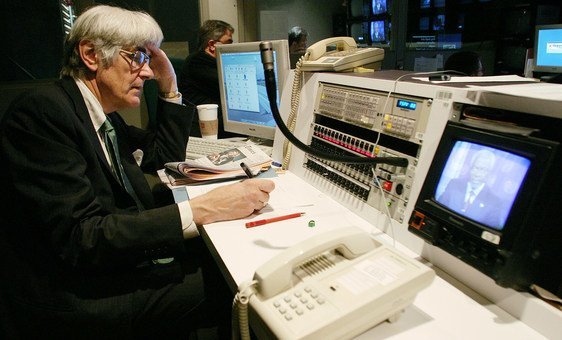 The former speechwriter, and senior journalist with the Financial Times, recalled that Mr. Annan had been recruited by the World Health Organization (WHO) in 1962, and that up until the 1980s he had worked for different Geneva-based UN agencies, such as the Office of the High Commissioner for Refugees (UNHCR).

“That was where he met Nane,” Mr. Mortimer explained. “She was a lawyer, working for UNHCR.”

The former communications director did not find it surprising that at the end of his term as Secretary-General. they wanted to come back and live in Geneva. He also credited the late UN chief with bringing Switzerland into the UN fold.

“I think it’s not a coincidence” that in 2002, during his time as Secretary-General “that the Swiss people voted to join the United Nations,” he argues.

“It’s not something that comes easily to a country like Switzerland, which is very careful about its independence; very distrustful of super-national systems. But I think the fact that the UN was led at that time by Kofi Annan who was somebody who many of them knew and felt a rapport with, I’m sure made a difference,” elaborated Mr. Mortimer.

The fact that people are still mourning Kofi Annan so strongly, indicates that there are many people in the world who realize that that’s what’s missing, and that that’s the kind of leadership that’s needed today

In his interview with UN News, he shared a charming episode about their life together, after his retirement. “He and Nane were living in Geneva, they’d find it difficult just to go for a walk in the street, because so often he was recognized and people would stop him and want his autograph and whatever,” said Mr. Mortimer.

With a marathon underway in the city, the couple thought it would be a good time to go out for a walk, thinking that nobody would be interested in them, but focused on the race instead.

“One of the runners in the marathon came off the course and came up to him and asked for his autograph,” said Mr. Mortimer. “So perhaps that gives you an idea of that rock star quality that he had.”

Outlining Mr. Annan’s key achievements, the Secretary-General pointed to the mobilization of a global response to the HIV/AIDS epidemic, that led to millions of lives being saved.

He also pointed to the ground-breaking Millennium Development Goals (MDGs), which galvanized unprecedented efforts to meet the needs of the world’s poorest, and have been credited with cutting world poverty by half.

Referring to current attacks on multilateralism, Mr. Guterres called Mr. Annan “principled and forceful in battling for the values of the UN Charter” and “a true UN-blue believer in a rules-based global order, who called the United Nations the ‘last best hope of humanity.’”

Kofi Annan joined the UN system in 1962 as an administrative and budget officer with the World Health Organization (WHO) in Geneva, rising to hold senior-level posts in areas such as budget and finance, and peacekeeping.

♦ Receive daily updates directly in your inbox - Subscribe here to a topic.
♦ Download the UN News app for your iOS or Android devices.
Kofi Annan