‘His words set a standard and will long endure’: UN mourns passing of Edward Mortimer

‘His words set a standard and will long endure’: UN mourns passing of Edward Mortimer

Friends and former colleagues have been mourning the passing over the weekend of Edward Mortimer, the Chief Speechwriter for former UN Secretary-General, Kofi Annan.

His time in office between 1998 and 2006, marked a crucial post-Cold War period for the UN, dominated by the Iraq War, and the fallout from the bombing of the UN Headquarters in the country’s capital, Baghdad, in 2003.

‘A gangle of limbs, a torrent of words’

“I vividly recall Edward’s arrival -- a jumble of gangly limbs, a tangle of unruly hair and, most of all, a torrent of words", recalled Richard Amdur, now Director of Speechwriting at the UN. “He was part of a crew of lively minds surrounding the Secretary-General, given license to think and experiment at a time when, still in the early years of the post-Cold-War period, the future of the United Nations was being written anew and was still full of hope.”

“He was warm, funny, incisive and loyal.  He embraced the United Nations, jousted with the talking heads on television to defend us, and was utterly devoted to Kofi.  To have his voice now silenced is a terrible loss, but his words set a standard then and will long endure.”

At the daily briefing on Monday for UN correspondents in New York, Stéphane Dujarric, the UN Spokesperson, described Mr. Mortimer as a “trusted adviser of the Secretary-General and ardent defender of the United Nations who made an imprint on many of Mr. Annan’s signature achievements and initiatives.”

“As colleagues, we were fortunate to work alongside someone who had a brilliant mind, a way with words and a ready sense of humour, and who was always collegial and warm.”

‘A privilege and honour’

Jaya Dayal, Chief of Staff to the head of the UN Department of Global Communications, worked closely with Mr. Mortimer as his Special Assistant between 2002 and 2006. She described the period as a “privilege”, adding that "Edward showed us how in our work, as well as in our daily lives, we can respect the dignity of each human being in a painfully imperfect world. Our work together was lightened by his great cheer and the generosity he showed to each of us, and that made us feel special in our mission.”

A former journalist for the Times, and Financial Times, newspapers, and an author of well-regarded books on Islam and the French Communist party, Mr. Mortimer, joined Mr. Annan’s senior staff mainly out of curiosity, as he explained in a 2014 interview with UN News.

“I wanted to see what the world looked like from this particular vantage point. I was obviously very pleased to be offered the job, but I felt that they should take me as they find me. I said what I thought, particularly in internal meetings. And I think that, generally speaking, that was appreciated as being useful.”

Coming from a relatively academic background, and with a focus on print journalism, some doubted if Mr. Mortimer would be the right person to write for the voice of the former UN chief, but he quickly adapted: “I had to simplify my style and pare it down somewhat – long sentences with subordinate clauses don’t work well in speeches. I think one of [Kofi Annan’s] virtues, is that he likes to express things in a reasonably simple way. So, it was important to write short sentences and not too many long words.”

In his 2014 interview with UN News, Mr. Mortimer was critical of the process by which the Secretary-General is selected, and called for a more transparent and inclusive method to be introduced.

“I think there’s a lot to be said for, instead of having a renewable five-year term, a non-renewable seven-year term so that the Secretary-General can then get on with the job without the constant suspicion that he’s currying favour with the great powers in order to try to ensure his re-election.”

After leaving the UN, Mr. Mortimer joined the Salzburg Global Seminar, an independent non-profit organization based in the Austrian city, as senior vice-president and chief programme officer. He was also the principal author for a Council of Europe report on the integration of immigrant communities into Europe and North America.

He leaves behind his wife, Elizabeth, four children, and seven grandchildren. 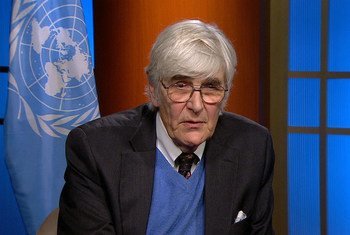 Edward Mortimer is an ardent believer in the need to change the way in which the Secretary-General of the United Nations is selected, and he is hopeful that this can happen.