Outlining Mr. Annan’s key achievements, the Secretary-General pointed to the mobilization of a global response to the HIV/AIDS epidemic, that led to millions of lives being saved.

He also pointed to the ground-breaking Millennium Development Goals (MDGs), which galvanized unprecedented efforts to meet the needs of the world’s poorest, and have been credited with cutting world poverty by half.

Referring to current attacks on multilateralism, Mr. Guterres called Mr. Annan “principled and forceful in battling for the values of the UN Charter” and “a true UN-blue believer in a rules-based global order, who called the United Nations the ‘last best hope of humanity.’”

Kofi Annan joined the UN system in 1962 as an administrative and budget officer with the World Health Organization (WHO) in Geneva, rising to hold senior-level posts in areas such as budget and finance, and peacekeeping.

He was the first Secretary-General to rise through the ranks of the Organization, and he served for two consecutive terms as the seventh UN chief, beginning in 1997.

At a personal level, said Mr. Guterres, Kofi Annan was “uncommonly warm, accessible and of the people.”

Ms. Espinosa said that it was fitting for the tribute to take place on International Peace Day – which was launched during Mr. Annan’s mandate – as no one laboured more tirelessly or consistently in the cause of peace than did Kofi Annan.

“Kofi Annan was a great [Secretary-General] because he understood that peace cannot be achieved in isolation. He subscribed fully to the principles set out in the preamble to the UN Charter and knew that they are mutually interdependent.

Succeeding generations will not be saved from the scourge of war until human beings can have faith in fundamental human rights, in the dignity and worth of the human person, in the equal rights of men and woman, and of nations large and small.”

Two members of the Elders, the independent group of global leaders working for peace and human rights, founded by Nelson Mandela, also spoke: Mr. Annan’s successor as UN Secretary-General, Ban Ki-Moon, and former Irish President Mary Robinson, who also served as the UN High Commissioner for Human Rights from 1997 to 2002.

Mr. Ban, speaking at the General Assembly for the first time since leaving office, said that “the international community was continually astounded by Kofi Annan’s razor-sharp intellect, moved by his guiding compassion and encouraged by his driving idealism.”

“His commitment to peace and conflict resolution, sustainable development, human rights and global education resonated powerfully with all those he came into across, including myself”

Following Mr. Ban, Mary Robinson spoke of Mr. Annan’s “courage, powers of persuasion and optimism that when we work together we can achieve great things. He believed passionately in the United Nations and its role in defending and progressing human rights.”

The last speaker was Mr. Annan’s son, Kojo, who told the General Assembly that one of his father’s favourite quotes came from Edmund Burke: “’The only thing necessary for the triumph of evil is for good men to do nothing.’ It was more than a quote. It was his code. My father’s race has ended, but the work continues. He believed this was the only work worth doing, creating a world where everyone can find home.”

A ‘charismatic leader’ dedicated to making the world a better place for all: officials bid farewell to former UN chief Kofi Annan

UN remembers Kofi Annan: A leader who put people at the centre of the Organization’s work 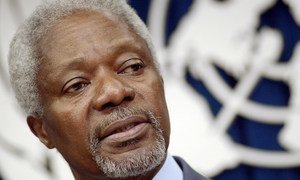