At the end of her mission to the country, Ikponwosa Ero, UN Independent Expert on the enjoyment of human rights by persons with albinism, issued a statement on Monday welcoming Kenya’s “unique achievements”, saying that the country was set to become a regional leader on the issue.

People with Albinism are born with lighter than normal skin, hair and eye colour, making them sensitive to the sun and bright light.

“Kenya’s successes include the allocation of a substantial annual budget geared toward specific measures for persons with albinism, who had historically been left behind in the key sectors of health and education and had fallen prey to ritual attacks and the consequent insecurities,” she said.

“However,” she continued, “much remains to be done including access to justice and judicial remedies for victims of attack as well as socio-economic support for victims and their families to help restore their lives.”

Ms. Ero also pointed to the need for protection measures in border areas like Migori and Taita Taveta counties, “where fear of attack remains high.”

She emphasized the need for a country-wide campaign to raise awareness, particularly in rural communities, to confront the falsehoods that lead to attacks “in the first place.”

#Kenya has recorded significant success in responding to attacks and discrimination against persons with #albinism in the health sector but must do much more in other areas like access to justice — @UnAlbinism.

“There is also a need for reasonable accommodation to help persons with albinism,” stressed the UN expert, such as providing support such as special eye-wear, for those with low-vision, which often occurs with albinism.

“The provision of such devices would help break down significant barriers to education and finding indoor employment,” she elaborated, suggesting also that hospitals dispense sunscreen, which is frequently unavailable “because of poverty and distance.”

“I also urge Kenya to create a brief but comprehensive national action plan, in line with the Regional Action Plan, to end violence and violations against persons with albinism as recommended by the African Commission on Human and Peoples’ Rights,” she added.

She recalled that the Sustainable Development Goals (SDGs) pledged to leave no one behind.

“I am convinced that Kenya is exemplifying this key principle. With improvements and continuity in its current positive trajectories, it will show the world some of the best practices for bringing those who are marginalized out of the fringes,” concluded the UN expert.

Ms. Ero will present a comprehensive report of her visit to the Human Rights Council, next March.

Independent Experts address either specific country situations or thematic issues in all parts of the world; they are not UN staff, nor are they paid for their work.

♦ Receive daily updates directly in your inbox - Subscribe here to a topic.
♦ Download the UN News app for your iOS or Android devices.
albinism|Kenya 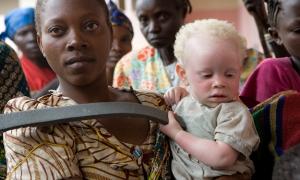