The United Nations said it regrets the decision of the United States to stop funding to the UN Relief and Works Agency for Palestine Refugees in the Near East (UNRWA) and called on other countries to help fill the remaining financial gap.

“We regret the United States’ decision to provide no further funding to UNRWA, which provides essential services to Palestine refugees and contributes to stability in the region,” Stéphane Dujarric, the spokesperson for the UN Secretary-General, said in a statement Friday.

“The Secretary-General calls on other countries to help fill the remaining financial gap, so that UNRWA can continue to provide this vital assistance, as well as a sense of hope to this vulnerable population.”

In the statement, Mr. Dujarric also noted that the US has traditionally been the largest single contributor to UNRWA and that the Organization appreciates its support over the years.

He added that UNRWA enjoys the full confidence of the Secretary-General and that the agency’s head, Commissioner General Pierre Krahenbuhl, has led a rapid, innovative and tireless effort to overcome the unexpected financial crisis it has faced this year.

“UNRWA has a strong record of providing high-quality education, health and other essential services, often in extremely difficult circumstances, to Palestine refugees who are in great need,” he said.

UNRWA was established by the General Assembly in 1949 to provide assistance and protection to a population of some five million registered Palestine refugees in various countries throughout the Middle East. Its services include education, relief and social services, camp infrastructure and improvement, health care and emergency assistance. 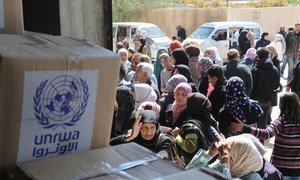 A pledging conference on Monday for the United Nations Relief and Works Agency for Palestine Refugees in the Near East (UNRWA) aimed to address the body’s chronic funding shortfall and also examine long-term priorities.