A pledging conference on Monday for the United Nations Relief and Works Agency for Palestine Refugees in the Near East (UNRWA) aimed to address the body’s chronic funding shortfall and also examine long-term priorities.

“The outstanding work of UNRWA has an immediate effect by meeting the urgent humanitarian needs of millions of Palestine refugees in the West Bank, Gaza, Jordan, Lebanon and Syria,” Secretary-General António Guterres said in his opening remarks at the Conference.

“At the same time, this work provides a foundation of hope and dignity – serving as a critical conflict prevention mechanism in a turbulent region and moving our world closer to the promise of the 2030 Agenda for Sustainable Development to leave no one behind,” he added.

For decades, UNRWA’s high quality education has been standard setting in the region, gender parity has been the school norm for generations and UNRWA health care has attained near universal immunization, the UN chief explained.

He also lauded the UN agency’s microfinance programmes and its work providing food assistance to 1.7 million refugees, while acknowledging: “All these efforts have taken place in an environment of chronic economic hardship and conflict.”

Mr. Guterres expressed deep gratitude to all who have contributed the funding that which has allowed UNRWA to maintain its vital services, noting the agency’s own extraordinary measures to reduce its expenditures by an additional $92 million.

“But these innovative efforts will not be sufficient to fully close the funding shortfall this year,” he said, urging UN Member States to make up the difference.

UNRWA’s vital efforts must not be allowed to falter, he said, stressing that failure comes with a price, namely more hardship for communities; more desperation for the region; and more instability for the world.

“We must do everything possible to ensure that food continues to arrive, that schools remain open and that people do not lose hope,” he said, and noted that closing UNRWA’s funding gap “is a wise investment for today and for the future.”

Miroslav Lajčák, the President of the UN General Assembly, pointed out that UNRWA had not been set up to last for 70 years.

“We have turned a temporary solution into the status quo,” he told those assembled, encouraging everyone to change that “through direct and meaningful talks.”

“And, ultimately,” he continued “a two-state solution, which allows Israelis and Palestinians to live side-by-side, in peace.”

He urged all to work together to come up with an immediate solution for the Agency’s shortfall, but added: “Let us not forget the bigger picture. And the urgent need for a political solution.”

For his part, UNRWA Commissioner General Pierre Krähenbühl presented a special report on the Agency’s current financial crisis, in which he outlined the dramatic dimensions of the funding shortfall.

He also highlighted resource mobilization efforts under way to address it, including the Dignity Is Priceless campaign, which aims to raise funds from individuals.

This year’s meeting was a milestone for judging the prospects to bridge UNRWA’s budget gap as well as a platform to outline consequences, should a significant shortfall remain.

The General Assembly established UNRWA in 1949 to provide assistance and protection to 5.3 million registered Palestine refugees in Gaza, the West Bank, Syria, Lebanon and Jordan.

♦ Receive daily updates directly in your inbox - Subscribe here to a topic.
♦ Download the UN News app for your iOS or Android devices.
UNRWA 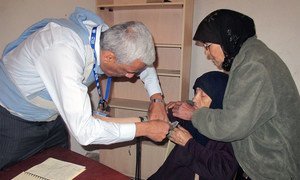 Non-communicable diseases such as diabetes, hypertension, cancer and smoking-related ailments, account for the majority of the chronic health problems confronting Palestine refugees across the Middle East, a new report by the United Nations agency which supports them, has found.