WHO/Lindsay Mackenzie
Dr. Alhassane Toure vaccinates a health worker at a health centre in the city of Mbandaka (16 June 2018).

The Ebola virus outbreak in Democratic Republic of the Congo (DRC) has been declared over, thanks to a concerted national and international effort to contain the threat, the UN’s top health official said on Tuesday.

The countdown to the announcement began on 12 June, when the last patient was released from care after testing negative a second time for the virus, whose symptoms include major bleeding and high fever.

Speaking from the country’s capital, Kinshasa, Tedros Adhanom Ghebreyesus, Director-General of the World Health Organization (WHO), hailed the “tireless efforts” of local teams in combating the deadly disease, which claimed 29 lives, and infected dozens more.

Mr. Tedros also congratulated health partners, donors and the DRC Ministry of Health for working together so effectively, to end the outbreak.

Unlike eight previous Ebola outbreaks in DRC in the past four decades, this latest episode was complicated by the fact that it involved a major urban centre of more than 1 million people, Mbandaka, with a direct connection via the Congo River to the capital and to neighbouring countries, as well as extremely remote rainforest villages.

There were concerns that the disease could spread from Equateur province to other parts of DRC and neighbouring countries, Mr. Tedros said, but the threat was minimized thanks to the release of emergency WHO funding within hours of the outbreak being declared on 8 May.

WHO and partners appealed for $57 million to stop the spread of Ebola; total funds received by all partners amounted to $63 million.

Fighting the DRC outbreak was also made easier by the existence of a vaccine, following a major trial in Guinea in 2016, one of three countries in West Africa where Ebola claimed more than 11,300 lives between 2013 and 2016.

The absence of a cure for the disease was in part responsible for the continued reliance on traditional burial methods, WHO has said, which in some cases involved bathing in the water used to clean those who had died from the virus.

WHO/Lindsay Mackenzie
Members of the Democratic Republic of the Congo Red Cross conduct a training on safe burials in the village of Itipo (10 June 2018).

In an appeal to the authorities and health partners to transfer the momentum of fighting Ebola to other diseases in DRC, Mr. Tedros said that they could be “confident” about tackling cholera and polio, too.

“We must continue to work together, investing in strengthened preparedness and access to health care for the most vulnerable,” he said.

Looking ahead, WHO Regional Director for Africa, Dr. Matshidiso Moeti, said that DRC was in a better position to address future public health emergencies, since “more than three quarters of the 360 people deployed to respond (to the Ebola outbreak) came from within the region”. 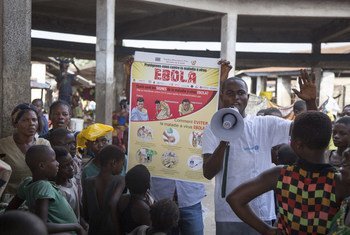 Almost two months after the start of the latest Ebola outbreak in the Democratic Republic of Congo (DRC), United Nations health experts announced on Tuesday that the deadly disease has “largely been contained”.