UN Photo/Martine Perret
A patient at a health centre in Butembo in the east of the Democratic Republic of the Congo has her temperature measured as part of efforts to prevent the spread of Ebola. (August 2019)
22 November 2019
Health

Amid multiple deadly attacks on civilians by armed groups in the eastern Democratic Republic of the Congo (DRC), an Ebola death “unlinked to any chain of transmission” risks reversing major gains against the epidemic, which is now down to just a handful of cases, a top UN medic said on Friday.

Speaking in Geneva, Dr Mike Ryan, Executive Director for the WHO Health Emergencies programme, told journalists that while “98 per cent” of infection in the last three weeks could be traced back to two different routes, or chains of transmission, a third one had been identified in Oicha health zone, North Kivu.

“This individual who turned out to be a community death had visited three separate health care centres in the Oicha area before being detected”, the WHO official said. “(He) was a moto driver himself and when his colleagues in the moto driver group learned of this death, they came to sympathise and the body was manipulated by a large number of colleagues and friends”.

Active transmission in an area where there has been active military engagement. No one predicted that - Dr Mike Ryan, WHO

According to  WHO, the death can be linked to health zones in Kalunguta, Mandima, Mabalako and Beni, in addition to Oicha.

“Right now, we know of over 200 contacts being associated with that case and of them we consider 62 to be of extreme high risk in terms of their exposure”, Dr Ryan said.

Security incidents linked to ongoing military operations against non-state armed groups and retaliatory attacks allegedly by the Allied Democratic Forces on civilians – who themselves have demonstrated against the violence, reportedly shutting down access to communities -  have hampered efforts by the WHO and partners to reach communities at risk from Ebola, including Beni, Oicha, and Kyondo health zones, Dr Ryan explained.

In an appeal for “sustained access” to Oicha in coming weeks to follow up and manage the situation, Dr Ryan insisted that health workers needed the same guarantees for Beni and Kalunguta.

“We now have a new scenario in which we have active transmission in an area where there has been active military engagement. No one predicted that,” he said. “So the issue now is, everybody needs to take account of that, everybody needs to put that into their algebra now and say, ‘Okay, what can we do to create a situation in which the response can continue?’ And that requires action by all parties, by the Government, by MONUSCO, by the UN, by everybody.”

According to the WHO, there have been 3,298 infections in total and 2,197 deaths since the latest outbreak was declared last August - an overall case fatality ratio of 67 per cent.

In the past week, only seven new confirmed cases of Ebola virus infection were reported in DRC’s North Kivu and Ituri provinces.

That is in line with confirmed infection levels in the past three weeks, which saw only 28 cases reported in four health zones in North Kivu and Ituri provinces, with the majority reported in three health zones: Mabalako (14), Beni (eight) and Mandima (five).

The reason for the high level of concern over the Oicha health zone fatality – which came after more than 30 days with no new cases – is that so many people came into contact with the deceased.

Comparing the estimated $1 billion price tag of confronting this Ebola outbreak with the $18 million investment in preventing transmission of the virus to neighbouring Uganda, Dr Ryan insisted that now was not the time to slow operations.

Ebola ‘likely to be with us for months’

“I don’t think we’re going to see an explosion” in infections, he insisted, before noting that the authorities were likely to be dealing with Ebola “for months to come”.

He added: “We have made significant progress in the containment of Ebola in the last two to three months, and the risks to other provinces and the risks to other countries have dropped dramatically…What we’re flagging here is, we have such an opportunity to finish that we need to exploit this opportunity now and security has become a major obstacle to doing that. And if we don’t, the chances are that if the security doesn’t improve or in fact deteriorates in the region, we could work our way back to a very bad situation.” 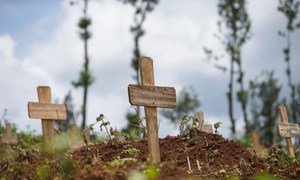 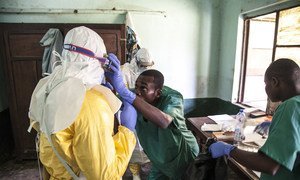 The Ebola outbreak in the eastern Democratic Republic of the Congo (DRC) officially remains a Public Health Emergency of International Concern, experts meeting in Geneva said on Friday.