UNAMA/Fardin Waezi
Afghan journalist Sabawoon Kakar, a Radio Azadi reporter, is laid to rest following a suicide attack in Kabul that killed Kakar along with eight other journalists on 30 April 2018.

The United Nations mission in Afghanistan has condemned Sunday’s terrorist attack outside Kabul’s airport that reportedly killed and injured scores of civilians.

The suicide attack took place among a crowd gathered to greet First Vice President Abdul Rashid Dostum, shortly after his convoy had departed the area.

According to news reports, the former civil war general returned to the capital, after living outside Afghanistan for more than a year.

“This was a senseless attack that served no purpose other than to spread terror and try to promote division,” said Tadamichi Yamamoto, the UN Secretary-General’s Special Representative for the country.

“The organizers of these attacks, those supporting these cynical crimes, must be held accountable and brought to justice,” added Mr. Yamamoto, who heads the UN Assistance Mission in Afghanistan (UNAMA).

According to UNAMA’s 2018 mid-year report on civilian casualties, suicide and complex attacks by anti-government insurgents killed 427 civilians and injured 986, a 22 per cent increase in the total causalities from the same period in 2017.

“At a time when Afghans are exploring ways toward much-needed peace, we must not allow such attacks to deter our collective resolve to make progress on ending the conflict,” said Yamamoto, who is also head of UNAMA.

Last week, Afghanistan concluded the voter registration process for the upcoming parliamentary and district council elections on 20 October and for the 2019 presidential elections.

And on Monday, the Security Council adopted a presidential statement to support the electoral process in Afghanistan, noting that more than 8.9 million Afghans, including more than three million women, have registered to vote.

In the statement, the 15-member body also emphasized the need to address remaining challenges and to accelerate progress in electoral preparations.

The Council also stressed the importance of an enabling a secure environment for voting, and condemned “in the strongest terms those who resort to violence to obstruct the electoral process, including the Taliban and the Islamic State of Iraq and the Levant (ISIL/Da’esh) affiliates.” 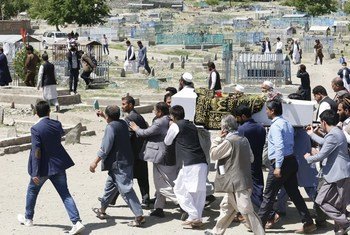