The UN Special Representative in Afghanistan, Tadamichi Yamamoto, hailed on-going efforts made towards peace and the engagement of women and youth across the country, but warned the Security Council on Monday that “daunting challenges” remain.

”This year is likely to bring both numerous challenges and unprecedented opportunities,” said Mr. Yamamoto, briefing Council members on the latest report of the Secretary-General on the situation in Afghanistan and its implications for international peace and security. “Addressing the challenges, and taking advantage of the opportunities, will require the concerted efforts of the international community, with Afghanistan in the lead”, he added.

Tadamichi Yamamoto, Special Representative of the Secretary-General for Afghanistan and the head of UN Assistance Mission in the country (UNAMA), briefs the Security Council. Photo: UN Photo/Eskinder Debebe

“Tangible progress” on the peace process

Various talks aimed at ending years of conflict have taken place in past weeks, notably between the United States Government and senior Taliban officials, as well as some Afghan representatives and the militant group.

“Despite such engagements, the Taliban have not yet accepted to engage in direct talks with the Government,” lamented Special Representative Yamamoto, who also heads the UN Assistance Mission in the country, UNAMA. “I stress the imperative need for the Taliban to directly talk with the Government,” as “inclusiveness, coherence, and representativeness in negotiations are critical for success.”

Commending the efforts made by the Government to establish a “negotiating structure, including a negotiating team,” and a consultative assembly of traditional leaders, Mr. Yamamoto insisted on the importance of ensuring all efforts towards peace are “Afghan-led and Afghan-owned.”

He stressed that the “peace process must be inclusive of the meaningful participation of groups representing all segments of Afghanistan's diverse society including women, youths, ulemas (Islamic legal scholars), and community and political leaders,” adding that the rights of the victims also need to be taken into consideration.

‘Daunting challenges’ ahead of presidential elections

Afghanistan is set to hold a presidential election later this year, a critical step in further consolidating the country’s representative political system.

“The holding of the presidential election on schedule, however, will be very challenging,” noted Mr. Yamamoto, citing “widespread reports of irregularities during last October’s parliamentary elections”, and “increasing scepticism” towards the country’s two election commissions mandated with delivering “credible and timely” elections.

The Special Representative explained that new members are being selected for these two commissions and called on all candidates and political actors “to commit to respecting the independence of the two commissions to enable them to work without any interference”.

With less than five months until election day, he warned that the remaining “technical and political challenges are daunting,” including the implementation of the new Election Law, along with the holding of three other elections (provincial council elections, district-council elections, and parliamentary elections for the province of Ghazni).

“The United Nations will continue to work with Afghan stakeholders to help them ensure that the electoral process is conducted in a credible, transparent and inclusive manner. It is important, however, that Afghan institutions and stakeholders fully realize that the ultimate responsibility and ownership for elections rests with the people of Afghanistan,” said Mr. Yamamoto.

The impact of conflict on civilians

In February, the UNAMA released devastating figures showing the direct impact of the conflict on the civilians. Fighting and brutal violence claimed 3,804 civilian lives in 2018, the highest number recorded since the UN started keeping records ten years ago. In addition, 7,189 people were injured in 2018, 5 per cent more than in 2017. 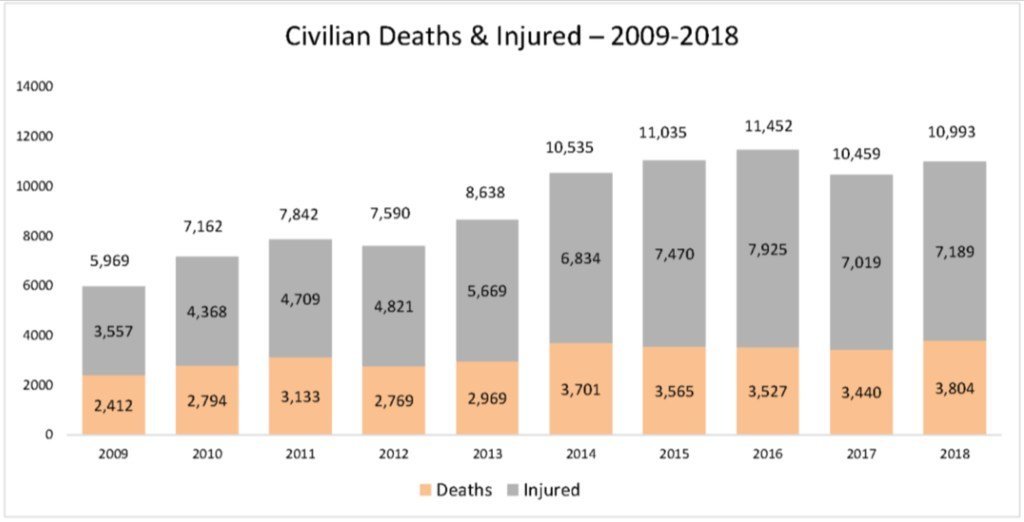 “But even these figures do not capture the full human cost of the war,” Mr. Yamamoto told the Council, noting that over half the population in the country lives under the poverty line and that 13.5 million people “survive on less than one meal a day,” a situation compounded by last year’s severe drought.

Finally, Special Representative Yamamoto mentioned the illicit trafficking of opiates as “another major socio-economic challenge” threatening stability in the country. It is estimated that 10 per cent of the adult population is addicted to narcotics.

“In order to tackle this complex issue, the whole demand and supply chain needs to be addressed,” he stressed, adding that “the United Nations family remains committed to supporting the country s humanitarian and development goals”.

♦ Receive daily updates directly in your inbox - Subscribe here to a topic.
♦ Download the UN News app for your iOS or Android devices.
Afghanistan|unama|security council