Fardin Waezi/UNAMA
Funeral of civilian killed in a suicide attack in Kabul, Afghanistan, June 2018. The UN mission in the country has reported that a record number of Afghan civilians were killed by warring parties in the first half of 2018.

According to the latest figures released on Sunday by the UN Assistance Mission in Afghanistan, known as UNAMA, there were 5,122 civilian casualties (1,692 deaths and 3,430 injured) in the first six months of 2018 – a three per cent overall decrease in casualties from last year.

But civilian deaths were up by one per cent, the most recorded in the same time period since UNAMA began documenting civilian casualties in 2009.

The continuing record-high casualty rates  are being inflicted on civilians despite the unilateral ceasefires by the Government and Taliban that occurred over the Eid al-Fitr holiday period between 15-17 June 2018.

Aside from casualties resulting from two Da’esh/Islamic State of Iraq and the Levant-Khorasan Province (ISKP)-claimed suicide attacks in Nangarhar during the ceasefires, UNAMA said that it had documented almost no other civilian casualties during the break in fighting.

“The brief ceasefire demonstrated that the fighting can be stopped and that Afghan civilians no longer need to bear the brunt of the war,” said Tadamichi Yamamoto, the top UN official in Afghanistan.

“We urge parties to seize all opportunities to find a peaceful settlement – this is the best way that they can protect all civilians,” said Yamamoto, who is also head of UNAMA.

The report, which comes amid fears of an uptick in violence,  also noted that the use of improvised explosive devices (IEDs) in attacks by Anti-Government Elements remained the leading cause of civilian casualties.

Record number of Afghan civilians being killed by warring parties, finds latest UN in #Afghanistan report. It doesn’t have to be this way. Read UNAMA update: https://t.co/TbuEnTQq5T pic.twitter.com/ophlmWfUgc

Ground engagements were the second leading cause of civilian casualties, followed by targeted and deliberate killings, aerial operations, and explosive remnants of war.  Civilians living in the provinces of Kabul, Nangarhar, Faryab, Helmand and Kandahar were the most impacted by the conflict.

She said that conflict-related violence continued to erode the rights of children to education, healthcare, freedom of movement and other fundamental rights, as well as family life, playing outdoors and simply enjoying a childhood free of the “brutal effects of war.”

Actions by the Government of Afghanistan to prevent civilian casualties continued, resulting in a reduction of civilian deaths and injuries from their operations, particularly from ground fighting, an area that UNAMA has consistently focused its advocacy with parties to the conflict in recent years.

The full UNAMA Protection of Civilians in Armed Conflict 2018 mid-year can be found here. 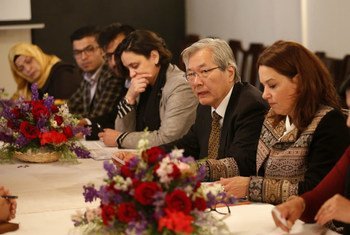 The coming months will present critical opportunities for the international community to review assistance to Afghanistan, as the country works towards a lasting peace, stable democracy and self-reliance, the top United Nations official there told the Security Council in New York on Tuesday.