WFP/Justin Smith
Drought has affected residents of the Mbera refugee camp, Mauritania, in the Sahel region of Africa.
30 June 2018
SDGs

Speaking at the launch on Saturday, Mohamed Ibn Chambas, the Special Representative of the Secretary-General for West Africa, highlighted the “immense” potential of the region – from natural resources and renewable energy to culture and tourism.

“Such significant opportunities offer a path to prosperity – provided we also address the root causes of today’s crisis,” he said, on behalf of Deputy Secretary-General Amina J. Mohammed.

“We are committed to working closely with all … countries of the Sahel and other partners whose initiatives fit under the Strategy.”

Mr. Chambas also highlighted the importance of mobilizing private and public investments in the Sahel as well as to empower people, reduce inequalities and enable all people in the region to enjoy lives of dignity and peace.

The launch was held on the margins of the 31st Summit of the African Union, in Nouakchott, the capital of Mauritania and was chaired by Ismail Ould Cheikh Ahmed, the Minister of Foreign Affairs of Mauritania.

Aude Rossignol/Office of the Special Envoy for the Sahel
Mohamed Ibn Chambas (centre), the Special Representative of the Secretary-General for West Africa, speaks at the launch of the support plan.

The plan focuses on six key areas, including cross-border cooperation; prevention and sustaining peace; inclusive growth; climate action; renewable energy; and women and youth empowerment. It will also support ongoing efforts and initiatives by Governments, international and regional organizations, and other partners.

In addition, given that nearly 65 per cent of the region’s population is below 25 years of age, the plan urges specific investments in education and vocational training to achieve higher demographic dividends.

The support plan is based on the priorities and needs of the people and countries of the Sahel and was developed in consultation with governments and regional partners, including the African Union to ensure inclusiveness, as well as national ownership and leadership.

Despite the enormous potential of the Sahel, the region remains gripped by humanitarian crisis as a result of insecurity and natural disasters, leaving millions in need of international assistance and protection. 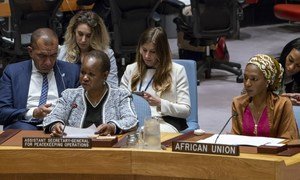