UN Photo/Eric Kanalstein
Women parliamentarians of the Afghan Lower House (Wolesi Jirga or “House of the People”) arrive at their inauguration ceremony in Kabul (2001).
30 June 2018
SDGs

United Nations Secretary-General António Guterres has underscored the “pivotal role” played by parliaments and their importance to “advance the aspirations” of the citizens they represent.

In a message marking the first commemoration of the International Day of Parliamentarism, Mr. Guterres, a former member of parliament himself, expressed his support for parliamentarians worldwide.

“Parliaments can be pillars of democracy, important defenders of human rights and can link local and global issues,” he said.

“Through laws and spending decisions, they can contribute significantly to achieving the Sustainable Development Goals (SDGs) – our blueprint for peaceful, resilient societies on a healthy planet.”

Sustainable Development Goal 16 (SDG16), in particular underscores the importance of parliaments given their role in ensuring effective and accountable institutions at all levels. In addition, through their legislative or oversight mandates, parliaments are also key enablers for a number of sustainable development targets.

However, across the world, parliaments remain “largely dominated by men” said Mr. Guterres, calling for greater participation of women in these assemblies.

According to the Inter-Parliamentary Union (IPU), women’s average share of parliamentary membership globally, stands at just over 23 per cent (2017 figures). Though this figure is an increase from just 17 per cent in 2007, the rate of growth has slowed down considerably.

“If current rates continue, it will take at least 250 years before we reach gender parity in parliaments,” said IPU, noting that initiatives such as women’s parliamentary caucuses can prove to be useful mechanisms to consult women and channel their needs into the work of parliaments.

In May this year, the UN General Assembly designated 30 June as the International Day of Parliamentarism, recognizing the role of parliaments in national plans and strategies and in ensuring greater transparency and accountability at the national and global level.

♦ Receive daily updates directly in your inbox - Subscribe here to a topic.
♦ Download the UN News app for your iOS or Android devices.
parliament|sustainable development 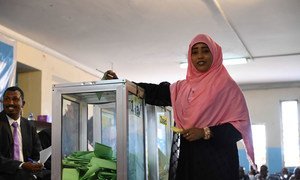