In Moscow on Thursday, Secretary-General António Guterres said multilateralism was vital to tackling climate change, terrorism and other dramatic challenges, and that the United Nations and Russia would continue working together to make global institutions stronger and better able to serve the public good.

“Facing dramatic global challenges, we need a global capacity to address them that reaffirms the importance of multilateralism and the importance of a rules-based set of international relations, based on the rule of law and in accordance with the UN Charter,” said Mr. Guterres, wrapping up a two-day trip to Russia during a joint press conference with Foreign Minister Sergey Lavrov.

“We had very constructive discussions about all the situations that are of course worrying us – from the Middle East, to several African locations, to North Korea, to Ukraine – to different other crises around the world,” said the Secretary-General.

He stressed that the UN and Russia would also work together towards conflict resolution in Syria, where he said the objective is to achieve a Syria in which territorial integrity is preserved, which can control its own destiny and where all groups can feel included.

In the afternoon, the Secretary-General met with the heads of UN agencies in Russia to commemorate 70 years of UN presence in the country. He also met with hockey legend Vyacheslav Fetisov, who was recently designated as UN Environment Patron for Polar Regions and who presented the Secretary-General with a pair of skates and his own hockey stick.

And yesterday, the Secretary-General and President Vladimir Putin met and discussed the state of international relations and multilateral institutions, as well as the situation in the Middle East, including Syria.

The Kremlin
Secretary-General António Guterres (right) shakes hands with Russian President Vladimir Putin during a meeting at the Kremlin in Moscow.
♦ Receive daily updates directly in your inbox - Subscribe here to a topic.
♦ Download the UN News app for your iOS or Android devices.
multilateralism 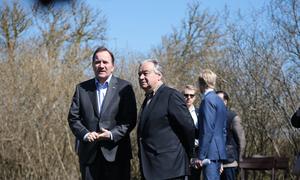 The unity within the Security Council played an essential role in creating the positive momentum that led to a decision by the Democratic People’s Republic of Korea (DPRK) to suspend nuclear tests and launches of intercontinental ballistic missiles, the United Nations chief said Monday, noting however that the 15-member body has so far failed to achieve such unity to tackle the Syrian crisis.