UNHCR/Caroline Gluck
Thousands of Rohingya refugees line the roads of the Kutupalong mega refugee settlement as the United Nations Security Council visit takes place. Many hold signs welcoming the visit and saying they want justice, as well as stating their key demands for repatriation. (file)

United Nations Secretary-General António Guterres has welcomed the understanding reached between UN agencies and Myanmar on creating conditions that would allow hundreds of thousands of Rohingya refugees to voluntarily and safely return to their homes in the country’s Rakhine province.

The Memorandum of Understanding, signed by the Government of Myanmar, the Office of the UN High Commissioner for Refugees (UNHCR) and the UN Development Programme (UNDP), on Wednesday, concerns the UN system’s support to creating conditions conducive to voluntary, safe, dignified, and sustainable refugee returns from Bangladesh, and their reintegration in the country.

“As these conditions are not yet in place, [the Secretary-General] welcomes the agreement by the Government of Myanmar to take this first step to address the root causes of the conflict in Rakhine,” read a statement issued by the UN chief’s spokesperson.

This is a first, and very important step, but it is now that the really important work starts — Knut Ostby, Humanitarian Coordinator

The Secretary-General also encouraged Myanmar to take “decisive steps to implement the agreement” and reiterated his call for an end to violence, accountability for perpetrators, redress for victims, humanitarian access to all areas in Rakhine state, and the implementation of the recommendations of the Rakhine Advisory Commission.

Ahead of the signing, UN Resident and Humanitarian Coordinator in Myanmar, Knut Ostby, said in an exclusive interview with UN News that the two most important conditions for their safe and voluntary return are citizenship rights and an end to violence.

“And there needs to be an absence of violence. People need to be able to return in peace,” he added.

Since August last year, some 700,000 mainly-Muslim Rohingya have fled Rakhine state, in majority-Buddhist Myanmar, for neighbouring Bangladesh. Most say they were fleeing violence and persecution, including a military campaign by Myanmar forces, which began in response to violent attacks by Rohingya insurgents.

The Memorandum of Understanding will give UNHCR and UNDP access to Rakhine state, including to refugees’ places of origin and potential new settlement areas that the UN has so far been unable to access since the violence escalated at the end of last August.

The access, once verified, will allow UNHCR to assess local conditions and help the refugees to make informed decisions on voluntary return.

The agreement will also allow UNHCR and UNDP to carry out needs assessments in affected communities and strengthen the capacity of local authorities to support the voluntary repatriation process.

The Advisory Commission on Rakhine State – a neutral and impartial body composed of six local experts and three international experts, chaired by former UN Secretary-General Kofi Annan – has proposed concrete measures for improving the welfare of all people in the province.

Its recommendations include establishing a clear and voluntary pathway to citizenship and ensuring freedom of movement for all people there, irrespective of religion, ethnicity or citizenship status.

The Rohingya have not been granted any level of citizenship, or citizenship rights, which is a major impediment to their return home. 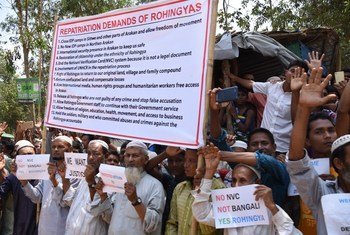 United Nations agencies and Myanmar have agreed a framework which it is hoped will lead to the repatriation of Rohingya refugees, but only if their “voluntary, safe, dignified and sustainable” return from camps in Bangladesh can be guaranteed. 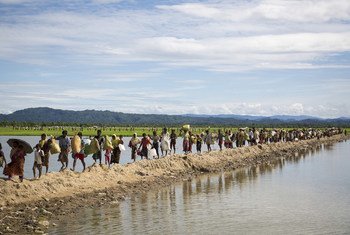 Late last year, as violent repression in Myanmar sent Rohingyas fleeing to safety in Bangladesh, women from the mainly Muslim minority were subjected to what a United Nations official called “a frenzy of sexual violence”.