‘They are always in our hearts’ says Guterres, leading remembrance of UN peacekeepers who made the ultimate sacrifice

‘They are always in our hearts’ says Guterres, leading remembrance of UN peacekeepers who made the ultimate sacrifice

Commemorating the International Day of United Nations Peacekeepers at the Organization’s headquarters, in New York, Secretary-General António Guterres paid tribute to the service and sacrifice made by UN “blue helmets” for the cause of peace around the world.

Since the first peacekeeping mission deployed 70 years ago, more than 3,700 military, police and civilians who chose to serve, have lost their lives.

“These peacekeepers gave their lives to protect the lives of others. We are forever in their debt, and they are always in our hearts,” said Mr. Guterres on Friday at a wreath-laying ceremony at the UN Headquarters.

Last year saw the highest number of fatalities – 132 individuals from 37 countries – for UN peacekeepers as a result of malicious acts; the highest in many years.

While 2017 was challenging in the face of rising threats, it also showed the value of UN peacekeeping, said the Secretary-General.

These peacekeepers gave their lives to protect the lives of others. We are forever in their debt, and they are always in our hearts – Secretary-General Guterres

“The closure of two of them, in Côte d'Ivoire and Liberia, is a landmark on the road to peace and stability in a region that was once in chaos. When the right strategies, resources and political support are in place, United Nations peacekeeping saves and improves lives for millions of people.”

Marked annually on 29 May, the International Day of United Nations Peacekeepers was established by the General Assembly to pay tribute to the contributions of uniformed and civilian personnel to the work of the Organization.

This year, the UN chief spent the International Day in Africa, with peacekeepers at MINUSMA, the UN peacekeeping mission in Mali; currently the most dangerous in the world. Since its establishment, in 2013 to help stabilize the north-African country, 169 military, police and civilian peacekeepers have lost their lives.

He said he was deeply impressed by the work being done by all personnel in the mission, given the daunting challenges they face: “Threatened by terrorists, criminals and armed groups of all kinds, they are helping to build peace, to protect civilians and guarantee the political process,” said the UN chief.

Also today, the Organization awarded the Dag Hammarskjöld Medal to military, police and civilian personnel who lost their lives while serving under the UN flag.

At the Medal ceremony, the Secretary-General spoke of the increasingly complex challenges facing peacekeepers on the ground, and that despite the overwhelming difficulties, civilian and uniformed UN personnel who had made the ultimate sacrifice – collectively and individually – had a “profound impact on the communities they served”.

“Most were deployed far from home, while others served in their own conflict-affected countries as national staff.  Every one of them made our world a better place,” he said.

The medal is named after Dag Hammarskjöld, the second UN Secretary-General, who along with his entourage died in a plane crash in what is now Zambia in 1961. 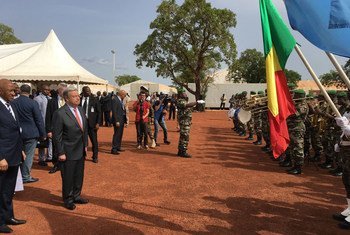 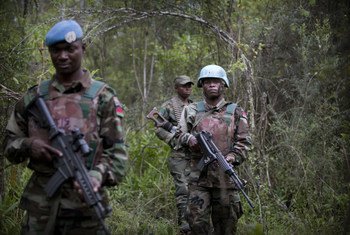