Countries back ‘ambitious and comprehensive’ reform of UN development system

Countries back ‘ambitious and comprehensive’ reform of UN development system

The United Nations General Assembly on Thursday gave the green light to a bold new plan to make sustainable development a reality, described by UN chief António Guterres as “the most ambitious and comprehensive transformation of the UN development system in decades.”

The UN Secretary-General said the reform package paved the way for a new era of “national ownership” of development, supported by the whole UN system, in a tailored fashion, allowing countries to pursue sustainable economic and social development.

“It sets the foundations to reposition sustainable development at the heart of the United Nations,” he said, after the 193-member intergovernmental body adopted the reform resolution by consensus.

“And it gives practical meaning to our collective promise to advance the Sustainable Development Goals (SDGs) for everyone, everywhere – with poverty eradication as its first goal, leaving no one behind,” he explained. “In the end, reform is about putting in place the mechanisms to make a real difference in the lives of people.”

The reform process will mean significant changes to the setup, leadership, accountability mechanisms and capacities of the whole UN development system; ensuring it meets national needs not only for implementing the SDGs, but also in meeting the climate change commitments made through the 2015 Paris Agreement.

Otherwise known as the Global Goals, the SDGs are a universal call to action, to end poverty and hunger; to protect the planet and ensure that all people enjoy peace and prosperity.

More specifically, the reform gives Resident Coordinators – the most senior UN development officials at the country level – a dedicated, independent role in coordinating the activities of all the various UN entities working locally, which make up UN Country Teams.

Currently, successful coordination depends too much on individual personalities and the goodwill of those involved, he said, highlighting that this reform will help resolve “a historic deficit in our coordination function” and accentuate strategies that work and are effective.

“You will be able to count on impartial and empowered Resident Coordinators – fully devoted to the needs that you require to fulfil the 2030 Agenda, drawing on experience, skills and knowledge across the system,” Mr. Guterres said.

“Our teams on the ground will now be better able to tailor their presence, capacities, skillsets and overall response to your priorities,” he added.

Speaking before the adoption of the landmark reform, General Assembly President Miroslav Lajčák, said that “this resolution, today, is not seen by everyone, as the perfect document.”

It is a legitimate outcome of a multilateral process. It shows what we are capable of –Assembly President Lajčák

“But it is a legitimate outcome of a multilateral process. It shows what we are capable of,” he added.

The UN Secretariat said that the reform implementation will require some $255 million annually.

In an interview with UN News, UN Deputy Secretary-General Amina Mohammed said that the changes will allow “a much more independent and impartial leader” at the country level to pull a team together.

“What I would say is that, in previous times, we’ve sort of had a conductor that, through no fault of their own, is conducting a cacophony – the left hand does not know what the right hand is doing,” she said, adding that “today, we have an opportunity to make a symphony for the SDGs. That’s really the difference on the ground.”

Ms. Mohammed stressed that the reform establishes clear accountability for the money spent, and highlighted the importance of partnerships among stakeholders, including Member States and the private sector.

“The assets of the United Nations are its people. We will invest in them. We will try to lead them, inspire them, incentivize them, and create the environments to make them go for gold,” she said. 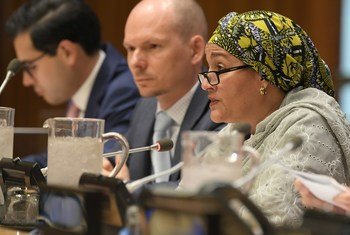 International efforts to create a world where no one is left behind will only become a reality if all sectors in society participate, the United Nations Deputy Secretary-General told ambassadors in New York on Wednesday.