OCHA/Jacob Zocherman
Remains of a burnt out home in Bor, South Sudan. (file).
8 May 2018
Peace and Security

In addition, while the Intergovernmental Authority on Development, IGAD - an eight-country trading-bloc in Africa - has worked to narrow the gap ahead of talks, the parties remain far from agreement.

The world’s youngest country, South Sudan, has spent much of the past seven years mired in conflict, riven by a political face-off between President Salva Kiir and his then former Vice-President Riek Machar that erupted into full-blown war late in 2013.

The conflict shows no signs of abating and there has been a recent surge in violence across large parts of the country, impacting thousands of civilians. Nearly 4.3 million South Sudanese have been driven from their homes – 1.7 million internally, and around 2.5 million across its borders.

Of particular concern is the scale of sexual violence perpetrated, said Mr. Lacroix, underscoring that reports of rape and gang rape are compounding what is already a “desperate situation” for women and girls.

Humanitarian agencies are also facing increasing challenges responding to those in need. In April, two relief workers were killed, bringing to 100 the total number of aid workers killed since December 2013.

“We must respond and respond quickly to ensure accountability for these violations and abuses and bring an end to these heinous acts once and for all,” stressed the senior UN official.

Both the Government and opposition remain bent on armed confrontation and the Agreement on Cessation of Hostilities – signed in December last year – is yielding little, underscored Mr. Lacroix, calling on the Council to use its influence.

“It is in this context that I reiterate that there must be a tangible cost for the continuation of violence in South Sudan,” he said, “there must be consequences for blatant violations of the Cessation of Hostilities agreement and broken promises to protect civilians.”

“Without consequences, we have no one to blame but ourselves for allowing the crisis to escalate unchecked and perpetuating a lack of confidence in a political solution to the crisis.” 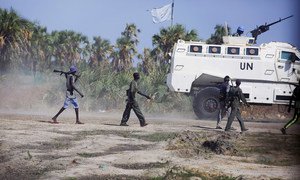 The surge of violence in South Sudan’s Unity region "looks set" to continue despite the ceasefire accord signed last year by warring parties, the top United Nations official in the African country said on  Wednesday.