The surge of violence in South Sudan’s Unity region "looks set" to continue despite the ceasefire accord signed last year by warring parties, the top United Nations official in the African country said on  Wednesday.

“All sides need to abide by what they agreed to and have their actions on the ground carefully monitored and scrutinized,” said David Shearer, the Secretary-General’s Special Representative and head of the UN peacekeeping mission in the country, known as UNMISS, referring to the Cessation of Hostilities Agreement signed in December 2017.

“The intensification of the conflict is having a serious human impact. Hundreds of people are sheltering next to the UN base,” he said. “We saw tukuls (huts) burnt to the ground. We were told that elderly people and children had been killed and medical clinics ransacked.”

Mr. Shearer made his comments during a visit to Leer and Dublual in the Unity region to see first-hand the impact of the deteriorating security situation on communities.

“I met a little girl who had been shot through her stomach and back. She is just one example of dozens of people injured and killed over recent weeks." - David Shearer, head of UNMISS

“I met a little girl who had been shot through her stomach and back. She is just one example of dozens of people injured and killed over recent weeks,” said Mr. Shearer. “We also know that hundreds, if not thousands, of people have fled into the swamps and are surviving on wild vegetables and fruit.”

Mr. Shearer and his mission team met with both Government and opposition leaders in the area, urging them to lay down their weapons, reconcile, and work together to build durable peace.

“Earlier this year it felt like we were moving in the right direction. But after seeing the effects on civilians of this conflict, I believe there is a real risk that the situation will deteriorate further and undermine the chance for lasting peace.”He said the signing of the Agreement last year had given the peace process momentum, but that it was at risk of unravelling without genuine political will.

Mr. Shearer said UNMISS would continue to fulfill its mandate.

“Our job is still to protect people and help them get through these dark times so that the peace process can work and we can find a durable solution. We will do all we can to support the people of South Sudan,” he said. 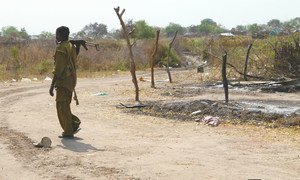 Surging violence in parts of South Sudan is putting thousands of war-weary civilians at risk and endangering the fragile peace process in the world’s youngest nation, the United Nations peacekeeping mission there has warned.