UNICEF/Romenzi
An 18-month-old toddler stands outside a tent where she lives with her family in Saadnayel Camp, an informal tented settlement where Syrian refugees are sheltering, in the Bekaa Valley, Lebanon.

Gathered in the Belgian capital, Brussels, alongside top officials from over 85 countries and organizations, UN and EU leaders also stressed that the stalled UN-led Syrian political negotiations, known as the intra-Syrian talks, must be revived.

In a video message to the conference, which aimed to boost support for the future of Syria as well as the wider region, which is hosting millions of refugees,  Secretary-General António Guterres said that negotiations are the only way forward.

“We see confrontations and proxy wars involving several national armies, a number of armed opposition groups, many national and international militia, terrorist groups, foreign fighters from everywhere in the world – all these creating a bleak panorama of Syria today where there is no military solution to the crisis,” he said

“The solution must be political.”

The UN chief also stressed the importance of Security Council resolution 2254 (2015), which endorsed a road map for a peace process in Syria, and the 2012 Geneva Communiqué, which set out the principles for a political transition in the country.

Mr. Guterres said he will continue to engage with Member States to move towards a genuine and credible political solution that meets the aspirations of the Syrian people to dignity and freedom.

António Guterres on "Supporting the Future of Syria and the Region"

Translate every cent into action

Relentless fighting across Syria, a conflict that has now lasted longer than World War II, has claimed hundreds of thousands of lives and left over 13 million in dire need of humanitarian assistance.

It has also forced 5.6 million Syrians to seek refuge in neighbouring countries where vulnerable host communities are reeling under the pressure.

Against this backdrop, the funds committed for 2018, and the additional $3.4 billion for 2019 and beyond, will ensure continuity of critical aid efforts – both for Syrians and refugee hosting communities.

“Every single cent we pledged today needs to be swiftly translated into action, spent in an effective and transparent way, this is our common responsibility,” said Christos Stylianides, the European Commissioner for Humanitarian Aid and Crisis Management, announcing the figures.

The funds will make a ‘real difference’

Mark Lowcock, the UN Emergency Relief Coordinator, welcomed the commitments and said that the resources will make a “real difference” for those suffering in the crisis.

He echoed Secretary-General Guterres’ call for a political solution.

“We are appealing on [the Syrian peoples’] behalf for an end to the violence: for a political solution, for a safe future with hope – of education, healthcare, work, and a return home. In other words: for a normal life.”

Parties to the conflict must respect the rules of war

Meanwhile in New York, Ursula Mueller, the UN deputy aid chief, briefed the Security Council on the humanitarian situation in Syria where called for the full implementation for Council resolution 2401.

In that resolution, the 15-member body demanded an immediate cessation of hostilities to enable aid to flow into the areas in need.

“We need to see firm steps taken to ensure that all parties respect the rules of war,” she said, stressing the need to protect civilians and stop attacks on health facilitates.

Ms. Mueller also called for safe, sustained and unimpeded humanitarian access to all in need and underscored that medical items must stop being removed from convoys.

“There is no reason why items previously agreed with the authorities are removed at the last minute. These are critical life-saving items and they must be allowed on our trucks.” 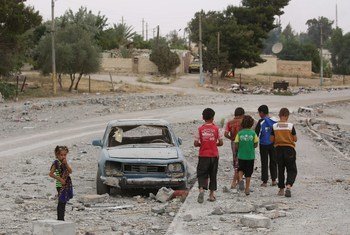 With the conflict in Syria into its eighth bloody year and human suffering worsening by the day, the United Nations and partners on Tuesday made a major appeal for additional funds, as well as for reinvigorating the stalled UN-led Geneva talks.