UNICEF/Adenike Ademuyiwa
Progress in malaria control was among the reasons the WHO African region experienced the greatest increase in life expectancy since 2000 – by 9.4 years to 60 years.
25 April 2018
Health

Marking World Malaria Day, the head of the United Nations health agency on Wednesday stressed the need to get the global response against the disease back on track while acknowledging progress that had helped avert millions of malaria deaths, especially among children, since 2000.

“The latest data from WHO [World Health Organization] show that the global malaria response is at a crossroads,” the agency’s Director-General, Tedros Adhanom Ghebreyesus, said in his video message for the Day, explaining that the declining trend in malaria cases and deaths has stalled, and vital funding for malaria programmes has flatlined.

“If we continue along this path, we will lose the gains for which we have fought so hard,” he added.

This year's theme of the Day is “Ready to Beat Malaria.”

Although more and more countries have eliminated the disease, challenges remain.

The UN health chief called on countries and the global health community to close the critical gaps in the malaria response, and urged all partners to unite around a common goal: accelerating the pace of progress.

“Together, we must ensure that no one is left behind in accessing life-saving services to prevent, diagnose and treat malaria,” he said. 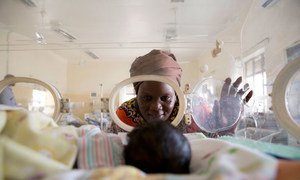 The head of the World Health Organization (WHO) on Friday marked World Health Day, and the agency’s 70th anniversary, with a strong call for universal health coverage, to ensure that all people can get quality health services, where and when they need them, without suffering financial hardship.