UNICEF/Souleiman
In Al-Tabqa city, Syria, a 12-year-old boy and his friends walk past a destroyed car. He and his family were uprooted twice during the years-long conflict, forcing him to drop out of elementary school. (file)
24 April 2018
Humanitarian Aid

With the conflict in Syria into its eighth bloody year and human suffering worsening by the day, the United Nations and partners on Tuesday made a major appeal for additional funds, as well as for reinvigorating the stalled UN-led Geneva talks.

“We want Syrians to know that they are not forgotten; that we are trying to find better ways to help them in this terrible situation,” said Mark Lowcock, the UN Emergency Relief Coordinator, at the opening of a two-day conference in Brussels, co-organized by the European Union, called Supporting the future of Syria and the region.

“Despite fighting, bombing and violence, we will not give up,” Mr. Lowcock said.

The fighting in Syria, which erupted in March 2011 and has now lasted longer than World War II, has left hundreds of thousands dead and more than 13 million in dire need of humanitarian assistance within the country. Another 5.6 million Syrians have fled to neighbouring countries for refuge.

The first few months of 2018 saw over 700,000 people fleeing their homes – many more than once – as well as 72 reported attacks on medical facilities.

“As the number of people in urgent need of assistance continues to grow, the United Nations has exhausted its resources to respond,” Mr. Lowcock said.

“We call on donors to pledge funds to assist and protect Syrian families wherever they are,” said Mr. Lowcock, who is also the UN Under-Secretary-General for Humanitarian Affairs.

According to the UN Office for the Coordination of Humanitarian Affairs (OCHA), which Mr. Lowcock heads, only $2.3 billion, or about 25 per cent, of the $9.1 billion needed for humanitarian and development assistance in 2018 has been received.

The total includes funds needed to meet needs both within Syria and among some 3.9 million vulnerable people in in communities hosting refugees.

Unless more funding is secured, critical programmes risk closure or sharp reductions in the coming months, with a potentially devastating impact on the most vulnerable and desperate families.

“Of all the humanitarian emergencies facing us today none match Syria’s in terms of scale or in the immensity of need,” said Filippo Grandi, the UN High Commissioner for Refugees.

“Whether for refugees, for host countries, or for host communities those needs are as urgent, as great, as ever.” 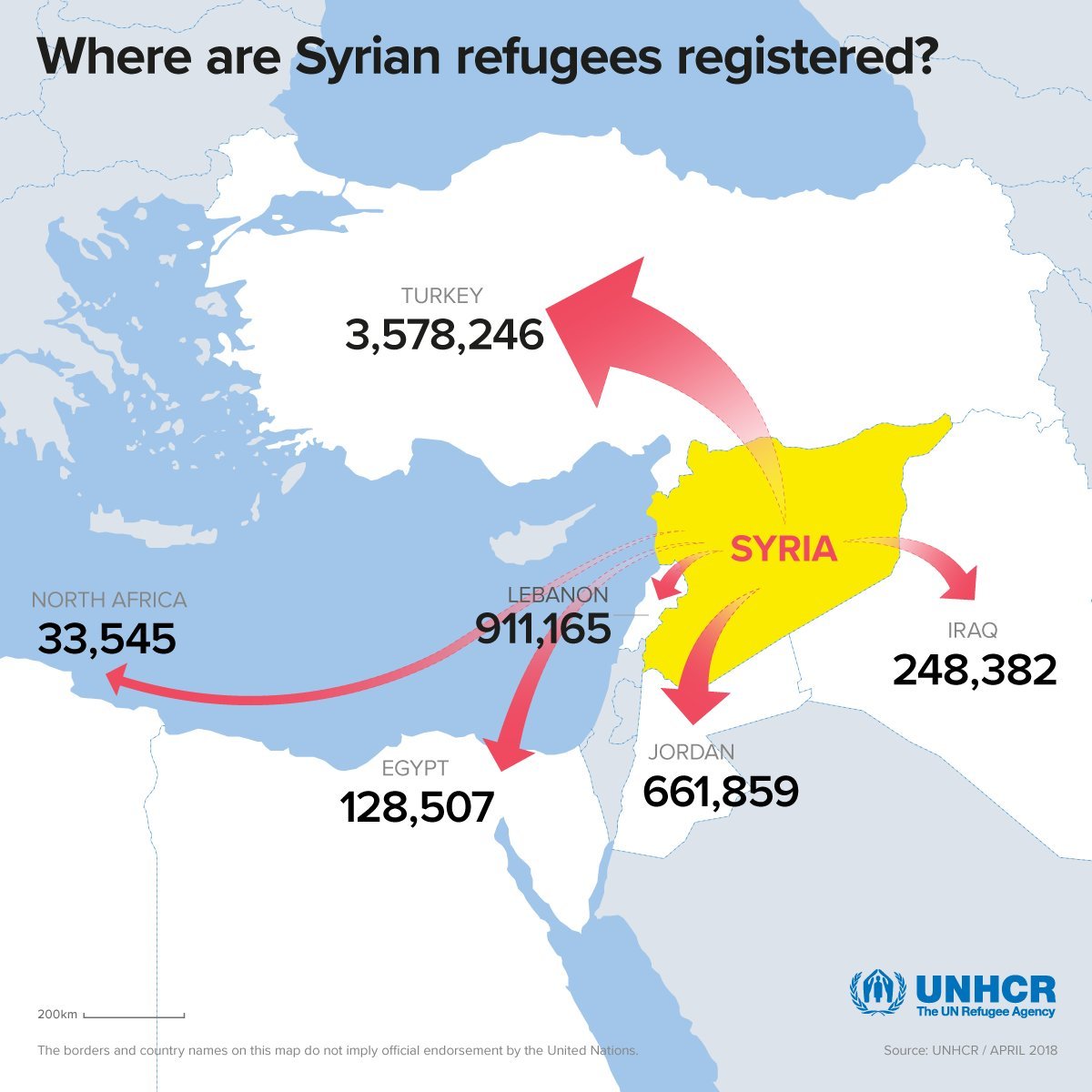 The widespread destruction of livelihoods and infrastructure has pushed 70 per cent Syrians into extreme poverty. At the same time, neighbouring countries are reeling under the strain of the massive influx of refugees from Syria.

“Host countries have demonstrated outstanding generosity to Syrian refugees for many years despite the huge pressure on national services and infrastructure,” said Achim Steiner, the Administrator of the UN Development Programme (UNDP).

“The international community must enhance their support for longer term development efforts to these countries on the front line who have been providing a global public good,” he said.

The two-day conference in Brussels is expected to draw ministerial-level participation from over 85 countries.

On the first day, more than 200 non-governmental organizations from Syria and the region discussed ways to improve services with ministers and top UN and EU officials. Separately, Staffan de Mistura, the UN Special Envoy for Syria and Federica Mogherini, the High Representative of the EU for Foreign Affairs and Security Policy, met with Syrian civil society leaders.

Speaking to the press following the meeting, they called on all parties to the negotiating table.

“They [the civil society] were sitting around the table together today, many of them did not agree with each other, in fact we noticed it, but they were able to sit around the table, that’s exactly what we want at the political level,” said Mr. de Mistura.

Results from the first day of discussions will feed into the plenary sessions on Wednesday, which will cover all key aspects of the conflict, including the political process. Also on day 2, the total amount of aid pledges received will be announced. The co-chairs plan to release a declaration at the closing of the meeting.