UN Photo/Albert González Farran
The mandate of the UN Mission in Liberia (UNMIL) came to an end on 30 March, 2018. Here, Nigerian peacekeepers serving with UNMIL depart for Roberts International Airport at the end of their deployment.

Commending the remarkable achievements made by the people and Government of Liberia to consolidate lasting peace and stability in the wake of a 1999-2003 civil war, the Security Council on Thursday asked the United Nations Secretary-General to conduct a study of the role played by its peacekeeping mission in resolving conflicts and other challenges the country has faced.

In a Presidential Statement adopted Thursday, the 15-member body said it “looks forward to the results of this study,” which can be useful when considering ways to enhance the overall effectiveness of UN peacekeeping.

The UN Mission in Liberia (UNMIL) closed on 30 March, ending a nearly 15-year presence in the West African country, which had been devastated by 14 years of civil war.

In the statement, the Council welcomed the continued implementation of the peacebuilding plan for Liberia submitted by UN Secretary-General António Guterres and stressed that the UN will continue to be an important partner of Liberia after the closure of UNMIL.

Addressing the Council, a senior UN peacekeeping official commended the people of Liberia whose resilience was the decisive factor in turning the page on crisis and conflict, and whose determination will ensure that the hard-won peace is sustained.

“For nearly 25 years, the situation in Liberia was so concerning that it has been a constant presence on this Council’s agenda. But the country has turned an important corner,” said Alexander Zuev, Assistant Secretary-General for Rule of Law and Security Institutions in the UN Department of Peacekeeping Operations.

UN Photo/Manuel Elías
Alexander Zouev, Assistant Secretary-General for Rule of Law and Security Institutions for the Department of Peacekeeping Operations, addresses the Security Council meeting on the situation in Liberia.

Mr. Zuev said that, now, with the people and Government of Liberia, lies the important work of continuing to build a nation – a unified, reconciled nation with an accountable Government committed to addressing corruption within its ranks, a nation where all citizens share the benefits of Liberia’s abundant natural and human resources, and a nation fully responsible for its own destiny, with institutions and a Government providing basic guarantees – of security, of protection, of services – to its citizens.

“The conclusion of UNMIL’s mandate […] is a remarkable demonstration of confidence that the country is moving steadfastly along the path of sustained peace,” he stressed.

The meeting was also addressed by Deputy Ambassador Irina Schoulgin Nyoni of Sweden, which is the chair of the Peacebuilding Commission’s Liberia Configuration, as well as Chid Liberty, the chief executive officer of “Liberty & Justice.” 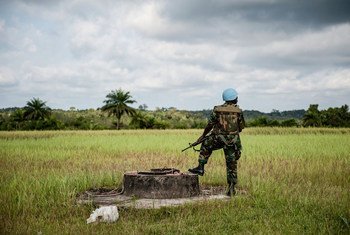