UN Photo/Staton Winter
A peacekeeper from Ghana stands guard during a senior UN official’s visit to Cestos City in 2012. Some 16,000 peacekeepers from over a dozen countries served in Liberia from 2003 to 2018.

The conclusion of the 15-year operation follows a landmark election that resulted in the country’s first transfer of power from one elected president to another in 70 years.  The newly elected President, George Manneh Weah, spoke for many Liberians as he thanked the UN for helping to make that possible.

“In our darkest days, the UN stood with us,” he said in his inaugural address in January.

Mr. Weah, a former football star, won the presidency in a runoff election in December, succeeding Ellen Johnson Sirleaf, who had served since 2006.

Speaking at an event last week in the capital, Monrovia, to mark the completion of the peacekeeping mission, known as UNMIL, he pledged that the good work of the UN will not be forgotten. “We will not fight again, we promise you,” he said.

In our darkest days, the UN stood with us — President Weah

Liberia, the first independent country in Africa, enjoyed nearly a century and a half of stability before falling into chaos, enduring two devastating civil wars between 1989 and 2003.

More than a quarter of a million Liberians were killed and nearly a third of the population was uprooted.  By some reports, 80 per cent of Liberian women and girls suffered conflict-related sexual violence.

The Security Council established the peacekeeping mission for Liberia in October 2003, as violence lingered even after warring factions agreed to a cease-fire and a plan for political rebuilding.

As peacekeepers first arrived, “the entire country was in turmoil,” recalled Lt. Gen. Daniel Opande, the first commander of UN forces in Liberia, in a recent interview.  “People were moving from place to place, looking for safety or for food.”

A newly secure environment enabled more than a million refugees and internally displaced persons to return to their homes. The Government established its authority throughout the country and by now has successfully held three presidential elections.

Some 16,000 personnel from more than a dozen countries served with UNMIL.  Their service did not come without sacrifice; 200 peacekeepers lost their lives due to illness, accidents or other causes while serving in Liberia.

Though peace remains elusive in many regions where UN forces have been deployed for years, the auspicious conclusion of the Liberia mission represents a success for UN peacekeeping, which has 110,000 men and women deployed in 15 operations worldwide.

And now, she noted, “the closure of UNMIL marks the transition of all three countries to peace and democracy.”

In a sobering statement to the Security Council in New York this week, Secretary-General António Guterres praised the peacekeeping successes in West Africa but highlighted the “serious challenges” that confront ongoing deployments in several other African countries.

Mr. Guterres called for advances in military equipment and preparedness, stronger measures to fight sexual exploitation and abuse and more clarity on the limits and roles of UN forces.

“Put simply,” he said, “peace operations cannot succeed if they are deployed instead of a political solution, rather than in support of one.”

Elections among many successes for Liberia

In Liberia, a broadly shared commitment to a new, democratic political order was an essential key to progress.

Last year’s presidential election, which led to the victory of Mr. Weah, was a collective success for all Liberians, said Farid Zarif, the former Afghan diplomat who has served as the Secretary-General’s Special Representative and head of UNMIL for nearly three years.

“It was a culmination of all the hard work that was done in post-conflict Liberia – on the part of the people of Liberia, the political leaders, the media, the civil society organizations,” Mr. Zarif said in an interview with UN News. The support of the international community, he added, was also enormously important “in bringing about the change that we saw culminating in the inauguration of the new President.”

Creating peace in Liberia has involved a lot more than wielding weapons. One of the UN mission’s tools has been public service radio broadcasts, in English and other local languages.

“We put a lot of emphasis on promoting peace and national reconciliation,” said Napoleon Viban, a Cameroonian who runs UNMIL Radio.  The programming has followed the spirit, he said, of a popular catch-phrase: ‘Mama Liberia is all we have.’

One of UNMIL’s core mandates was to help the Liberia National Police build its capacity to take over security responsibilities. In July 2016, the UN handed over all security tasks to the Liberian authorities – a benchmark on the path to this month’s full withdrawal of the mission.

“I think this has been our major achievement,” said Timba Ngulube, a female police officer from Zambia serving with UNMIL. “From what I have seen,” she said, the Liberian police and other security agencies “are able to stand on their own.”

Bintou Keïta, the UN Assistant Secretary-General for Peacekeeping Operations, saw first-hand the results of the years of mentoring, training, and capacity-building.

“One proof that it worked,” she said during a recent visit to Liberia, “is that there was no such huge violence during the preparations for the election.”

Female peacekeepers serving with UNMIL were a key component of the mission, which was the first to have an all-female police unit, comprised of 140 members from India.

Having a large number of female peacekeepers in Liberia over the years, performing tasks such as military patrols and helping to strengthen local police, inspired Liberian women to join the security sector.

“I never had the slightest thought that I could be a police officer,” said Teta Wilson, who works in the Operation Centre of the Liberia National Police.

“But when I came in the police station and I saw how things are working, I felt prompted that I can do more,” she said.

With stability restored and UNMIL planning for its exit, the mission partnered with local organizations on development projects that could improve the lives of the Liberian people.

A series of “quick impact” projects were carried out across the country, including sustainable farming, agriculture, baking collectives, recycling, climate action, and urban development.

Yacoub El Hillo, the UN Humanitarian Coordinator in Liberia, said that the projects are an example of ongoing UN support for sustainable peace and development.

“It is true that UNMIL is closing, but through projects like these, new openings are being made possible for Liberians to go further,” said Mr. El Hillo, who will stay on as the UN Resident Coordinator, working with numerous UN agencies whose development work in Liberia will carry on.

Despite all of its achievements, Liberia still remains fragile on many fronts, noted Special Representative Zarif. “We should not just presume that everything is fine and leave the country without any assistance.”

“Liberia is going to continue to require the solidarity, the support, and help of the international community for the long haul,” he said. “But they have already started demonstrating that they are the ones who are responsible for the future of their country.” 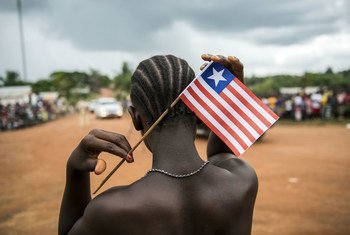 As the United Nations peacekeeping mission wraps up in Liberia and the West African country looks to secure a stable future, the UN deputy chief on Friday cautioned the Government that while it has made great strides, the road ahead will be challenging. 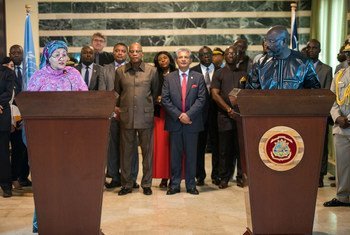 As part of her visit to Liberia Amina Mohammed, United Nations Deputy Secretary-General, celebrated the successful closure of the UN mission there, which she said set the stage for sustained peace in the months and years ahead.