“My parents managed - with many sacrifices on their part - to put me through high school during a time of great turmoil in my country, following which I started doing a number of jobs to help out financially.”

Elfreda braided hair and tutored younger children in her community, often returning home late at night, afraid of being raped at a time when sexual violence was rife in Liberia.

Rachel Briggs, another UNPOL officer from Liberia deployed to the world’s youngest country, has a similar story. “I had so many dreams but the war in my country shattered them. I was separated from my mother in 1990 and until today, I don’t know if she is dead or alive. I continue searching for her, but my life has moved on,” she reveals.

I always tell them - look where Liberia was and look how peaceful we are now. If we can do it, so can you - Rachel

For UNPOL officer Alfreda Tozay, it’s the memories of people being killed, destroyed properties and extreme hunger, which still resonate.

“Liberia, when I was growing up, was an endless saga of horrors. My parents didn’t have enough food for us, and I would go to the bush, make charcoal to sell on the streets. I would sell bread on the roadside. But still, there was never enough to eat,” she recounts.

But their lives changed after the former UN Mission in Liberia (UNMIL) was deployed in September 2003. The UN’s mandate in Liberia was to monitor the ceasefire agreement following the second Liberian civil war.

But ‘blue helmets’ on the ground didn’t merely broker a hard-fought peace for the troubled country; they were a beacon of hope for the Liberian people, especially women, to rise up and contribute towards shaping a brighter future.

Elfreda, Rachel, and Alfreda joined UNMIL’s police training and became some of the first women to join the Liberian National Police.

Now, these remarkable women are part of the first-ever deployment of UNPOL officers from Liberia to UN Peacekeeping.

South Sudan, and specifically Bor in Jonglei state, where all three are stationed, holds a special place in their hearts.

“When I came to Bor and started patrolling among communities, I knew exactly what they are going through because I and all the Liberian people have suffered the same,” says Elfreda. “This made me uniquely positioned to form a bond with the South Sudanese people and calm any tensions.

“When they hear my stories, they feel like they have found a sister. I always tell them—look where Liberia was and look how peaceful we are now. If we can do it, so can you.”

For Rachel, empathizing with the South Sudanese communities she serves has been, at once, harrowing and rewarding. “After my first patrol in Bor, I returned to my accommodation in the mission and cried.

“It was like watching history repeat itself in South Sudan. But I knew I could make a difference and bring hope to communities living here. I tell them about my childhood, and I keep emphasizing a single point—forget the past and join together to build a better future for your children,” she states passionately

An honour to serve

“Our experience of a 14-year civil war and the impact that UN peacekeepers had, is real and tangible for the people we are on the ground to serve,” adds Alfreda. “We benefited so much from peacekeepers, and it is our honour to now serve in this young nation under the iconic blue flag.”

Elfreda, Rachel and Alfreda were among nine Liberian UNPOL officers who recently received the prestigious UN medal for their service to the cause of building a lasting peace in South Sudan.

“Being shortlisted for UNMISS was a dream come true and everyday as we enhance capacities of our local counterparts in the South Sudan Police Service, we ask them to look at us as an example of what a country and its women can achieve, with help from the UN,” continues Rachel with a smile.

“We learnt a lot from UNMIL peacekeepers. Now, as UNMISS peacekeepers, it is our time to give back to South Sudan,” says Elfreda in conclusion.

The historic medal ceremony for these nine outstanding Liberian police officers was full of special moments. A particularly poignant one was when Murat Isik, UNPOL Chief of Staff for UNMISS - who had previously served with the UNMIL from 2004-2005 as the instructor of the Liberian Police Service Training Academy - pinned the medal on one of his former cadets, Togba Massaquoi.

"There can be no greater joy than to see Togba serve ably as my deputy at UNMISS, helping create a more peaceful, prosperous South Sudan. Togba and every awardee from Liberia are living examples of the power of peace," said Mr. Isik, eloquently.

The moving occasion was attended by UNMISS Police Commissioner, Christine Fossen, and Deputy Special Representative as well as Resident Coordinator for South Sudan, Sara Beysolow Nyanti, who hails from Liberia herself. 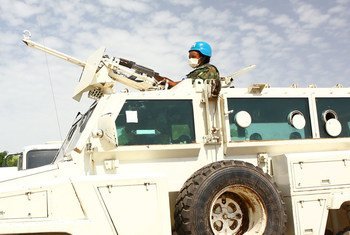 With eight months remaining, the window of opportunity is closing for South Sudan to meet critical benchmarks required to complete its transition away from long-running civil conflict, the Special Representative for the country told the Security Council on Monday, pressing parties to the November 2018 peace deal, to implement their commitments in letter and spirit. 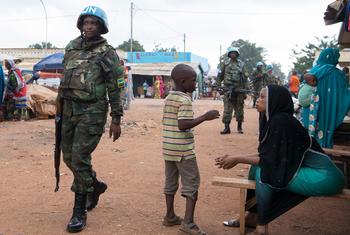 Every day, United Nations peacekeepers work to protect millions of vulnerable people in increasingly dangerous places in the world’s most fragile political contexts.