UN Photo/Rick Bajornas
Ahmet Üzümcü, the Director-General of the Organization for the Prohibition of Chemical Weapons.
4 April 2018
Peace and Security

“Once the results of the analyses of the samples are received, the Secretariat will produce a report on the basis of these results and will transmit a copy of this report to the United Kingdom,” Ahmet Üzümcü, the Director-General of the Organisation for the Prohibition of Chemical Weapons (OPCW), told the body’s Executive Council.

“The UK has expressed its wish to be as transparent as possible and has already indicated its preference for disclosure of the report to other States Parties,” he added.

The samples were collected from Sergei Skripal and his daughter, Yulia, who have been hospitalized since when they were found on a public bench in the English city of Salisbury in early March, after reported exposure to a toxic chemical.

In the immediate aftermath of the incident, the UK said that it was “highly likely” that Russia was behind the incident using a deadly nerve-agent. The accusations were met by a firm denial by Russia, which as a State Party to the Chemical Weapons Convention (CWC), requested today’s Executive Council meeting.

The UK sent the OPCW samples of the nerve agent within days of the incident.

According to OPCW, samples were also collected from a third individual – a police official – reportedly exposed to the chemical.

The samples were sealed and brought to the OPCW laboratory on 23 March.

An OPCW expert team was deployed to the UK at the country’s request seeking technical assistance in identifying the nature of the toxic chemical reportedly used.

In his update, Mr. Üzümcü also said that OPCW team worked independently and in not involved in the national investigation by the UK authorities and that no State Party is involved in the technical work that is being carried out by the Secretariat.

The OPCW is the implementing body of the Convention, which came into force in 1997 and outlaws the production, stockpiling, and use of chemical weapons and their precursors. 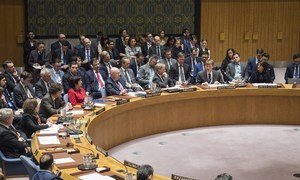 During a heated debate in the United Nations Security Council on Wednesday, the United Kingdom said that it was “highly likely” that Russia was behind an attack using a deadly nerve-agent, which has left Sergei Skripal and his daughter, Yulia, hospitalized in critical condition.