UN Photo/Eskinder Debebe
Nebenzia Vassily, Permanent Representative of the Russian Federation to the United Nations addressing the Security Council meeting to consider a letter dated 13 March 2018 from the United Kingdom to the Council regarding the 4 March chemical attack in Salisbury.
5 April 2018
Peace and Security

During a heated debate in the United Nations Security Council on Thursday, Russia again rejected allegations levelled by the United Kingdom that Moscow was behind a deadly nerve-agent attack in the English city of Salisbury on 4 March.

Russia “is not responsible” for the attack in Salisbury, that country's Ambassador to the UN, Vassily Nebenzia, said, stressing that the origin of the substance used in the incident has not been confirmed.

Today’s meeting, requested by Russia, took place amid expectations that the results of tests of samples collected from individuals exposed to a nerve agent in Salisbury will be known by early next week.

The United Kingdom sent the Organisation for the Prohibition of Chemical Weapons (OPCW) samples of the nerve agent within days of the incident, which left Sergei Skripal and his daughter, Yulia, hospitalized.

After the incident, the UK wrote a letter to the UN Security Council, stating that it was “highly likely” that Russia was behind the incident using deadly nerve-agent Novichok. At the 14 March Security Council meeting requested by the UK, Russia – a State Party to the Chemical Weapons Convention (CWC) – firmly denied the allegations.

The Convention, which came into force in 1997, outlaws the production, stockpiling, and use of chemical weapons and their precursors.

At today’s meeting, Mr. Nebenzia accused the UK of engaging in a “theatre of the absurd,” and wondered why Russia would want to wage such an attack, eight years after Mr. Skripal was granted amnesty, and before the Russian presidential elections and the 2018 World Cup soccer event.

Further, the Russian delegate said that his country does not have a copyright on Novichok and that line of toxic substances has been developed in many countries, including the United States and the UK.

“Yet people are demanding that the Russian Federation acknowledged its guilt,” he said.

His delegation has prepared a draft statement for the Council that will be a litmus test as to whether the UK and its allies are true to their words; rejecting that test will be a confirmation of their “dirty games,” he added.

At an OPCW Executive Council special meeting on Wednesday, Russia proposed a joint investigation with the UK, which was rejected by the UK and its allies.

UN Photo/Eskinder Debebe
Karen Pierce, Permanent Representative of the United Kingdom of Great Britain and Northern Ireland to the United Nations, addressing the Security Council meeting to consider a letter dated 13 March 2018 from the United Kingdom to the Council regarding the 4 March chemical attack in Salisbury.

Speaking after Mr. Nebenzia was UK Ambassador to UN, Karen Pierce, who said that her Government’s investigations into the use of chemical weapons involved 250 police detectives interviewing more than 500 witnesses, supported by a range of experts and partners that have gone through more than 5,000 hours of video footage.

A military-grade nerve agent – a weapon of mass destruction – has been used in an attempt to kill civilians on British soil in a reckless fashion, she said.

Telling the meeting that she would “take no lectures” from Moscow, Ms. Pierce said: “There is one country, Russia, which is playing a fast and loose with our collective security and the international institutions that protect us.”

Noting that Yulia is now able to communicate and is getting better, Ms. Pierce said that the UK Government received a request from the Russian consulate for access to Yulia, which was already conveyed to her.

♦ Receive daily updates directly in your inbox - Subscribe here to a topic.
♦ Download the UN News app for your iOS or Android devices.
security council|chemical weapons 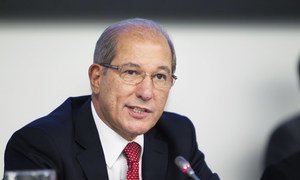