UN Photo/Harandane Dicko
MINUSMA peacekeepers patrolling the village of Bara in northeastern Mali. It is one of the most dangerous UN peacekeeping missions.
15 April 2018
Peace and Security

The United Nations Secretary-General is calling on political leaders in Mali to ensure those responsible for a deadly assault on peacekeepers serving in the north are brought to justice.

One blue helmet from Burkina Faso was killed in the attack, which took place on Saturday at a base in the city of Timbuktu housing camps from the UN Multidimensional Integrated Stabilization Mission in Mali (MINUSMA) and a French military operation known as Barkhane.

The attackers were disguised as UN peacekeepers, according to media reports.

MINUSMA supports political processes in Mali, in addition to carrying out a number of security-related tasks, and this was the largest attack against the Mission since its deployment five years ago, and the third this month.

UN Secretary-General António Guterres has conveyed his condolences to the Government of Burkina Faso and to the family of the fallen peacekeeper.

He also wished a speedy recovery to the injured.

“The Secretary-General calls on the Malian authorities as well as the signatory armed groups to the peace agreement to spare no effort in identifying the perpetrators of this attack, so that they can be brought to justice as swiftly as possible,” said a statement issued on Sunday by his spokesperson.

He said these acts will not deter the UN Mission’s determination to support the Malian people in their quest for peace and stability.

Mr. Guterres also paid tribute to the courage of the men and women serving in MINUSMA, as well as the Malian and international forces, who are doing so “at great personal risk and sacrifice.”

The UN Security Council has also issued a statement condemning the attack.

The 15 ambassadors expressed concern about the security situation in Mali and the terrorist threat also affecting other countries in the Sahel.

They said efforts by the Force Conjointe, a counter-terrorism brigade comprised of forces from five Sahelian countries, will contribute to creating a more secure environment in the region.

♦ Receive daily updates directly in your inbox - Subscribe here to a topic.
♦ Download the UN News app for your iOS or Android devices.
MINUSMA 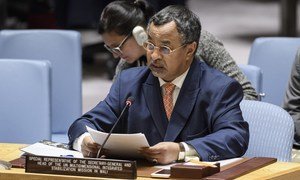