UNHCR/Helen Caux
A Malian woman with her children outside their makeshift shelter on the grounds of a former hotel in Mopti. Fighting forced them to flee their home in northern Mali.
23 February 2018
Peace and Security

A resurgence of communal violence and armed conflict in recent weeks has led to an increase in the number of internally displaced persons (IDPs) in northern Mali, the United Nations International Organization for Migration (IOM) reported on Friday.

Despite a drop in numbers towards the end of 2017 – from 40,743 individuals in October to just over 38,100 in December­ – latest figures show an additional 8,164 displaced persons have registered in the regions of Mopti, Menaka, Timbuktu and Gao.

IOM said the increase has put “significant pressure” on humanitarian operations, given the fragile security situation in the region.

“Northern Mali still holds the largest number of IDPs especially due to the deterioration of the security situation,” according to a press release by the agency.

Mali, located in West Africa, was rocked by a political crisis in 2012, including a military coup and rebellion its northern region.

A United Nations peacekeeping mission, known by the French acronym, MINUSMA, has been supporting the political process and stabilization efforts since 2013.

The UN migration agency had expected an end to internal displacement in Mali by the end of last year, “provided there was no resurgence of armed conflict or communal violence to complement the provision of adequate humanitarian assistance to IDPs and host communities.”

However, IOM said that in addition to the tensions in the north, the international community “has struggled to mobilize” funding to support vulnerable communities and IDPs.

IOM and its partners plan to respond to the new wave of displacement, funds permitting.

♦ Receive daily updates directly in your inbox - Subscribe here to a topic.
♦ Download the UN News app for your iOS or Android devices.
mali|IOM|MINUSMA 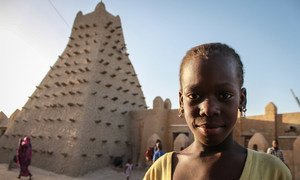 Aid agencies in Mali have launched the 2018 Humanitarian Response Plan (HRP ), asking for $263 million to provide humanitarian assistance to the most vulnerable people, a senior United Nations aid official in the country said