UNIC Tokyo/Takashi Okano
The 2030 Agenda for Sustainable Development acknowledges the importance of sports for social progress as well as an important enabler of sustainable development.
5 April 2018
SDGs

Ahead of the International Day of Sport, world renowned Japanese athletes are joining a United Nations-backed campaign to promote global development goals through the Tokyo Olympic and Paralympic Games their country will host in 2020.

“Let’s use the 2020 Olympics and Paralympics as an opportunity to let the world know about the importance of SDGs [Sustainable Development Goals],” said Koji Murofushi, the gold medalist in hammer throw at the 2004 Athens Olympics, in his video message.

The 2030 Agenda for Sustainable Development and its 17 SDGs were adopted by world leaders in 2015 as a blueprint to achieve a healthy planet where people can live free of poverty and hunger by 2030.

“I often see poverty with my own eyes when I go overseas for tennis matches. Now, donation is probably the only way I can contribute but I support activities aiming to eradicate poverty,” said Mai Minokoshi, a professional tennis player, in her message.

The campaign was launched by the UN Information Centre (UNIC) in Tokyo and Japan Sports Agency, with the support of Sport for Tomorrow, a Government-private joint venture, to commemorate the International Day of Sport for Development and Peace, annually observed on 6 April – the day the first modern Olympics was held in 1896.

In the 2030 Agenda, sport’s role for social progress is acknowledged as “an important enabler of sustainable development.”

“I believe Olympics and Paralympics symbolize peace. I hope for a day where everyone can live peacefully” says Taiki Morii, a silver medalist in Alpine skiing in 2018 PyeongChang Paralympic Winter Games.

The campaign has now gone beyond Japan, with Sally Conway of Scotland, who won the bronze medal in judo at the 2016 Rio Olympics, and Kreshma Rasikh from Afghanistan’s national women soccer team, joining the growing ranks of athletes disseminating their video messages on social media platforms.

The International Day of Sport for Development and Peace was created by the UN General Assembly in 2013.

In her message for the Day, Audrey Azoulay, Director-General of the UN Educational, Scientific and Cultural Organization (UNESCO), said that sport relies upon the concepts of respect, understanding, integration and dialogue, and it contributes to the development and fulfilment of individuals regardless of age, gender, origins, beliefs and opinions.

“That is why sport is a unique forum for action and reflection to transform our societies,” she said.

Nuclear material in Japan incorrectly measured in past, IAEA confirms 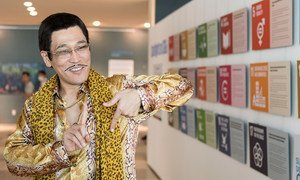 Japanese entertainer Piko Taro, famous for his “Pen-Pineapple-Apple-Pen” (PPAP) viral music video, has joined the ranks of celebrities who promote the Sustainable Development Goals (SDGs) on behalf of Governments, the United Nations, civil society and other actors in the global development community.