United Nations Secretary-General António Guterres has called for an independent and transparent investigation into clashes at the Gaza fence on Friday between Palestinians participating in the ‘Great Return March’ and Israeli security forces which resulted in at least 15 deaths and a large number of injured.

The UN chief’s call for a probe came as the Security Council convened an emergency meeting so its members could be briefed on the deadly incidents.

Thousands of Palestinians marched to Gaza’s border with Israel earlier Friday to protest the long-standing blockade of the enclave. A UN political official said the Palestinian Health Ministry confirmed that 15 Palestinians were killed and more than 1,000 were injured, including by teargas suffocation.

A statement issued by a UN spokesman said the Secretary-General is deeply concerned by the reports of the deadly clashes and that he appealed to those concerned to refrain from any act that could lead to further casualties, particularly measures that could place civilians in harm’s way.

“This tragedy underlines the urgency of revitalizing the peace process aiming at creating the conditions for a return to meaningful negotiations for a peaceful solution that will allow Palestinians and Israelis to live side by side peacefully and in security,” the statement said, reaffirming the readiness of the United Nations to support the process.

Meanwhile, Tayé-Brook Zerihoun, the deputy UN political affairs chief, told the Security Council that around 30,000 people participated in and around the March at various locations in Gaza. Soon after the demonstrations started, the situation turned deadly in several spots.

Mr. Zerihoun, who is the Assistant Secretary-General for Political Affairs, said reports indicate that most of the demonstrators stayed well away from the border fence and were not violent.

“However, there are also reports that some protestors engaged in stone-throwing and violent behavior; some reportedly carrying weapons,” he added.

He told the Council that according to reports from Israeli security forces, militants tried to get through the fence an in attempt to plant explosives. Palestinians also reportedly sent a nine-year-old girl through the fence, but Israeli forces were able to send her safely back.

Hamas leaders were reportedly also present at some of the gatherings.

Violence also broke out in the West Bank, where an estimated 900 Palestinians demonstrated, mostly in cities such as Ramallah and Hebron. According to the Red Crescent, 27 Palestinians were wounded in clashes near Nablus, he said.

“Prior to the March, Israel had increased its forces along the border, deploying snipers, special units and drones, and sent out warnings that it would act to prevent any breach of the border fence or violations of Israel’s sovereignty,” Mr. Zerihoun noted.

Throughout the day, the Office of the UN Special Coordinator for the Middle East Peace Process, known as UNSCO, was in contact with both Palestinian and Israeli security forces and would continue to do so as more demonstrations are expected over the next six weeks.

“There is fear the situation might deteriorate in the coming days,” said Mr. Zerihoun, telling the Council that the UN would continue to stress that civilians should not be targeted and that all actors refrain from putting children at risk.

He also called on Israel to uphold its responsibilities under international law, emphasizing that lethal force should only be used as a last resort, with any resulting fatalities properly investigated by the authorities.

“The developments in Gaza today are again a painful reminder of the consequences of a missing peace between Israel and Palestine, and the need to step up our efforts in support of a peaceful resolution of the conflict,” he concluded. 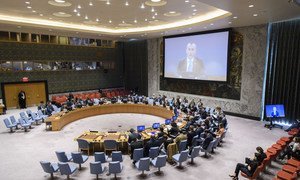 Reporting that over the past three months, Israel has advanced 22 plans for some 1,200 housing units for one area of the West Bank, a United Nations envoy warned Monday that such ongoing settlement expansion is eroding the prospect of a two-state solution to the long-standing Middle East conflict.